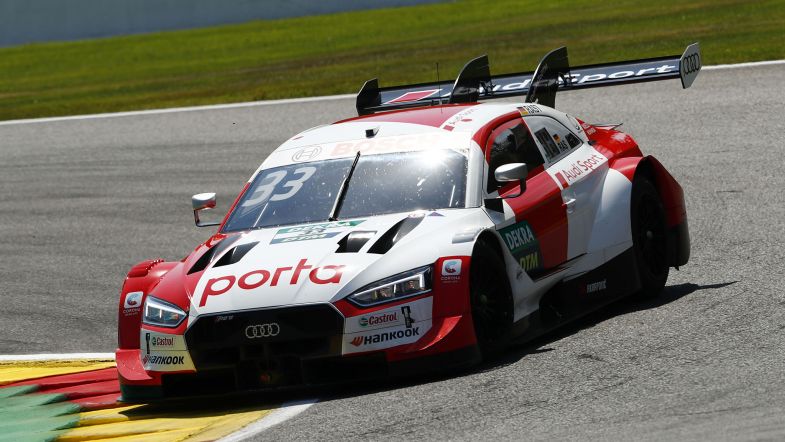 Reigning champion René Rast set the fastest lap of the weekend at Spa-Francorchamps to claim the pole position for Sunday’s Race 2, leading an Audi 1-2-3 in the qualifying session.

Ferdinand Habsburg was able to participate in the session after the WRT mechanics repaired his Audi RS 5 DTM after the Austrian’s accident in Saturday’s free practice.

Audi Sport Team Rosberg driver Jamie Green went fastest after his first flying lap, but had the time deleted for exceeding the track limits at Turn 4. Habsburg suffered the same decision twice, with the Austrian not having completed a valid lap with five minutes to go in the session. Other drivers having lap times deleted because of track limits included Audi’s Mike Rockenfeller and Loïc Duval and BMW’s Jonathan Aberdein.

After the first attempt, Audi Sport Team Abt Sportsline’s Robin Frijns again led the classification with the fastest lap of the weekend and a comfortable four-tenth advantage over team-mate Nico Müller. Team Rosberg’s Rast in third, received instructions about improving on the second sector, where the reigning champion was losing time.

The field returned to the track with just five minutes to go, with most driver improving their personal bests.

BMW Team RBM’s Sheldon van der Linde rose to the second spot of the grid with just one minute left on the clock, but Audi Sport Team Abt Sportsline’s Nico Müller stole his spot by nearly two-tenths.

But it would be the reigning champion who, with the chequered flag already waving, would claim pole position with a time of 2:04.199, 0.285 seconds faster than Frijns and almost six-tenths better than Müller.

Team ART Grand Prix’s Robert Kubica could only be 12th, two seconds off the pace, with Fabio Scherer the best qualifier for WRT in 14th place, 2.4 seconds behind Rast. Habsburg finished the session without a valid lap time due to several track limits penalties.

Rast said after the session: “My drive improved a lot from the first set to the second set. The key was nailing the corners, even though I made a mistake, but the car behaved very well. Today it’s a lot cooler, temperatures are ten degrees less, we’ve also made some adjustments to the car, so let’s see how it goes later.”