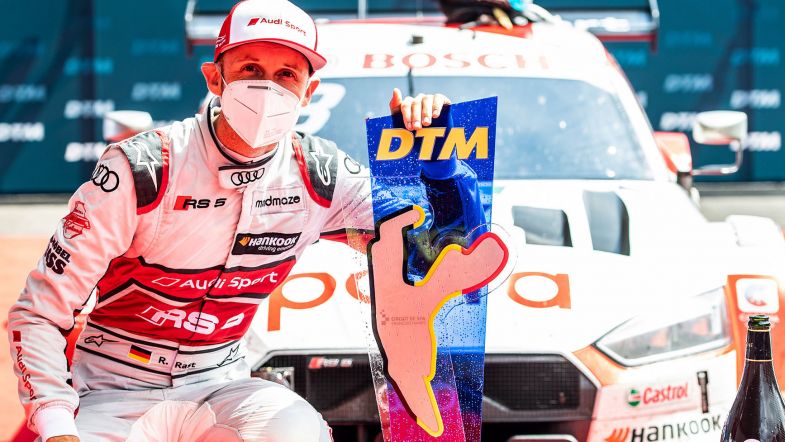 René Rast: “We have shown that we have the better engine”

Audi Sport Team Rosberg driver René Rast had a perfect second day at Spa-Francorchamps, scoring the maximum 28 points on offer after claiming both the pole position and the victory, and highlighted the Audi engine as a key to the win.

Despite the results, the reigning champion didn’t have an easy race, finding himself in a hard fight with Race 1 winner, Team Abt Sportsline’s Nico Müller.

Rast claimed the lead at the start, but was overtaken by Müller on lap four. The reigning champion waited until lap 13 to change his tyres, sticking to a one-stop strategy.

“I started from the pole position and the car went well,” said Rast after the race. “We made a few changes to the balance setup and I also adjusted my driving style, which worked well for us and now I got the reward for that.”

Müller pitted a lap later than Rast, with the Swiss initially staying ahead, until the Team Rosberg driver launched his attack and overtook for the lead on lap 20.

“I felt that on the second stint I had the same pace as Nico,” added Audi driver. “But I also felt that he didn’t want to pass me back so I couldn’t use the DRS on him.”

“I knew that it would be on the last lap for him, so I prepared the exit from Eau Rouge differently, so he couldn’t take the slipstream,” explained the 33-year-old.

“Today was even better than yesterday,” said Audi Motorsport boss Dieter Gass. “It’s really good for us to see that we can continue where we left it last year. Spa is a very special track. We know that here tyre management is very important, but we also know that the engine is very important and we have shown here that we have the better engine.”

Rast is second in the standings with 39 points, seven points behind Müller and nine ahead team-mate Jamie Green.