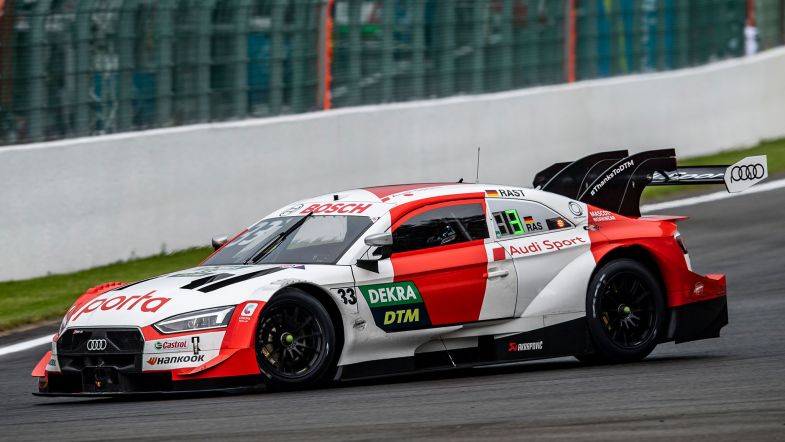 Team Rosberg driver René Rast prevailed in a hard battle against fellow Audi driver Nico Müller to take his first victory of the season, as the Ingolstadt-based manufacturer scored another 1-2-3-4-5 result at Spa-Francorchamps.

WRT’s Ferdinand Habsburg was allowed to take part in the race starting from the last spot of the grid, despite not completing a valid lap in qualifying due to several track limits infractions.

At the start Rast didn’t have a problem, with Nico Müller taking second place and his team-mate at Team Abt Sportsline Robin Frijns in third.

WRT’s Harrison Newey got a drive-through after sending BMW’s Jonathan Aberdein into a spin at the Bus Stop chicane.

Müller closed the gap to Rast, attacking at Les Combes and overtaking for the lead on lap four. At the end of the lap, Green overtook van der Linde for fifth place.

Habsburg was the first driver in the field to pit, at the end of lap eight. Green tried to close on Rockenfeller, with the 2013 champion responding to keep his advantage. Further back, Team Phoenix’s Loïc Duval overtook BMW’s Lucas Auer for seventh place at Eau Rouge on lap ten.

Also on a move was WRT’s Fabio Scherer, with the Swiss overtaking BMW’s Timo Glock on lap 11 for tenth place. The WRT driver had Eng next in his sights, overtaking the BMW on the following lap.

Frijns attacked Rast for second place at Bruxelles, as the reigning champion was losing ground to Müller. Rast pitted at the end of lap 13.

Müller mirrored Rast’s move a lap later, returning to the track with barely a two-second advantage over the reigning champion. With Wittmann between the two, Rast had to wait until the hard braking towards La Source to overtake the BMW driver.

Frijns pitted from the lead at the end of lap 16, returning to the track behind Müller, Rast and Wittmann and in the grips of Rockenfeller. The Dutch driver managed to warm up his tyres in time to avoid losing to the Team Phoenix driver, who had his team-mate Green already knocking on his rear bumper. 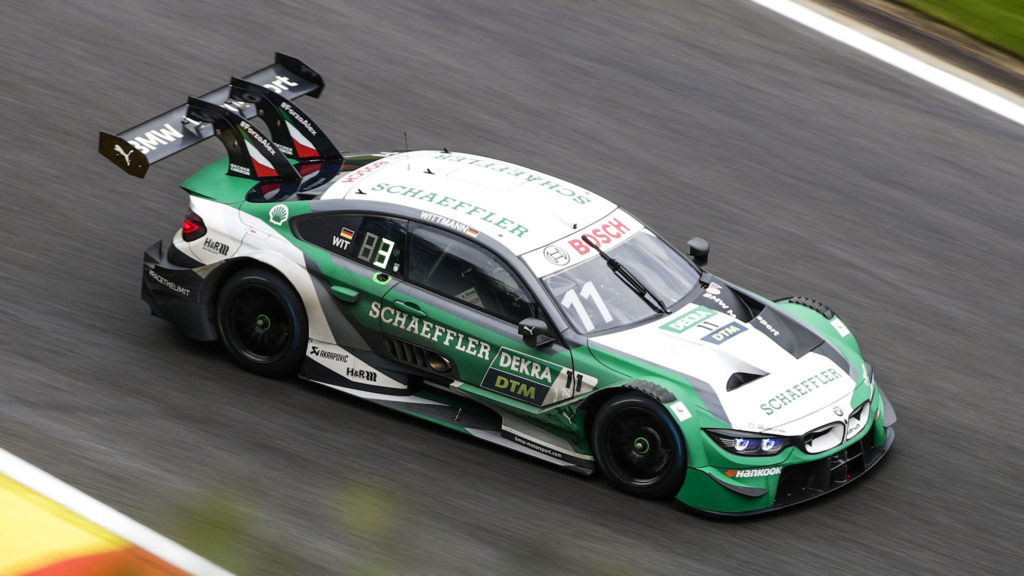 Wittmann came in for his obligatory pit stop at the end of lap 17, the last driver on the field to do so.

Green overtook Rockenfeller for fourth place at La Source on lap 20, as Rast was again closing the gap in order to launch a final attack on Müller for the race lead.

Rast lined up at the La Source exit on lap 21, coming right under Müller’s rear bumper to finish the overtaking manoeuvre at Les Combes.
Rast and Müller kept fighting until the finishing line, with the reigning champion taking his first victory of the year, with Müller in second place and Frijns completing the podium.

Green and Rockenfeller completed the second 1-2-3-4-5 result in two days for Audi Sport, with van der Linde the best placed BMW driver in sixth position, ahead of Duval and Auer. Aberdein was ninth for BMW, with Wittmann completing the top ten and starting his 2020 points account.

After the first round of the season Müller leads the drivers’ championship with 46 points, seven ahead of Rast and 16 over Green.

The next round of the season will take place at the Laustizring on the 14-16th of August.