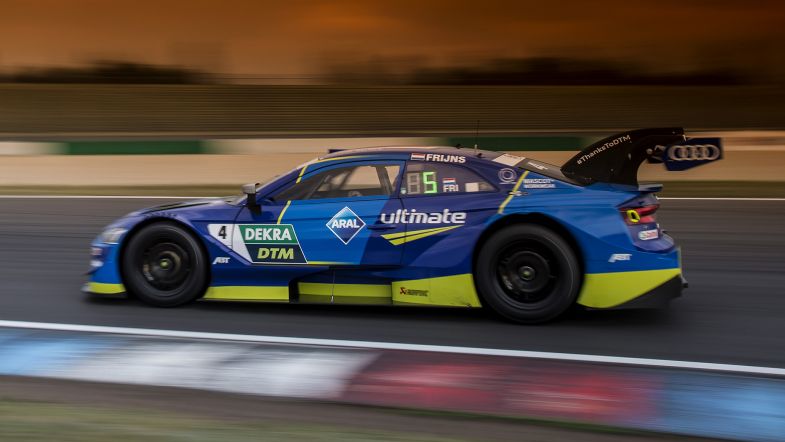 Robin Frijns claims pole position for Race 1 at the Lausitzring

Audi Sport Team Abt Sportsline driver Robin Frijns confirmed his strong pace this season, achieving his second pole position of the year on Saturday at the Lausitzring.

The Dutch driver, who has qualified on the front row for all the races so far this season, beat team-mate Nico Müller on his last run.

Despite the possibility of rain, the session took place on a dry track, with the entire field venturing onto the track at the green light.

The BMW M4 DTMs seemed to have an early edge, with Team RBM’s Sheldon van der Linde the first to clock a reference lap time. The fight for top spot during the first run was very tight, with the positions at the top changing constantly.

The cars returned to the pits after nine minutes for the final adjustments, with Team Abt Sportsline’s Müller the fastest driver at that point, despite complaining to his engineers of an unstable front end in his RS 5 DTM.

The drivers returned to the track with just five minutes left on the clock, enough for the last two flying laps of the session.

Frijns stole the top spot, with a time of 1:15.486, not only the fastest of the weekend so far, but also enough to claim his second pole-position of the season, with Müller in second place, a tenth behind, and Team Phoenix’s Loïc Duval in third place, two-tenths off the pace.

Van der Linde was the fastest driver for BMW Motorsport in fourth place, barely three-thousandths behind Duval, with Team RMG’s Timo Glock in fifth, 0.340 seconds behind Frijns. His team-mate Marco Wittmann made a last-run effort to climb up to sixth place, 0.349 seconds off the place, with Team Rosberg’s René Rast in seventh, a further four-thousandths behind.

Frijns said after the qualifying: “I didn’t really expect the pole position as I was struggling yesterday with the track and the car. For the race, there is less tyre degradation that we had at Spa, so I hope we can hold the position.”

Müller thinks he missed on the opportunity to score a new pole-position: “It will be a long race. I’m happy with how things are going, but I had some traffic in both runs, to there is some pace in there. The race will be long and with hot temperatures, so tyre management will again be key, so let’s see how things go.”