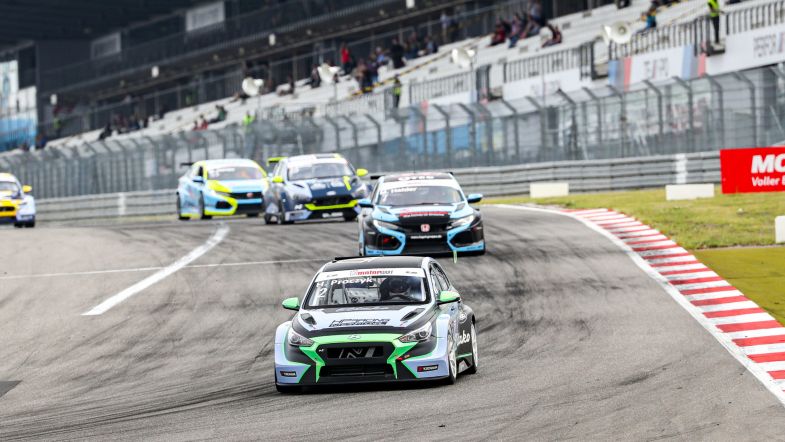 HP International’s Harald Proczyk claimed his first TCR Germany championship victory of the season in the second race at the Nürburgring.

The Austrian, who finished ninth in Saturday’s opening encounter following a drive-through penalty for jumping the start, ironically profited from a jump-start from long-time leader Antti Buri to secure the win over guest driver Norbert Michelisz.

Following the surprise announce that both Hondas of Mike and Michelle Halder would be withdrawing from the championship, just 13 cars took the start of the second race of the weekend.

Buri’s start initially looked to have been perfectly judged as the Finn leapt off the line to beat pole sitter Nico Gruber to the first corner. But it was deemed that Buri, like Target Competition’s Andreas Bäckman, had moved before the lights went and both had to serve drive-through penalties.

That gave Proczyk the lead but only after the pair had given everyone an idea of what the race could have been like if Buri had not been penalised.

Buri held a comfortable 1.5 second margin over Gruber, which had been extended to nearly three seconds as Gruber came under attack from Proczyk.

Gruber then slowed coming out of the final chicane and ground to a halt on the main straight with a suspected front-right suspension problem.

Proczyk then set about closing down Buri, which he was able to do before the latter’s drive-through. Once in the clear, the 2018 champion led home Michelisz by just over three seconds.

Michelisz had made impressive progress up the order from his starting position of fifth, but nearly threw away his surge through the field when passing Andreas Bäckman for fourth.

The defending WTCR champion had the better run of Bäckman heading into the chicane but locked his rear tyres, with an alert Bäckman cleverly backing out to avoid contact.

Michelisz made the move stick on the next lap at the same corner and profited from Gruber and Buri’s misfortune to finish second.

Dominik Fugel stayed out of trouble to claim third on the road, which gave the German points for second owing to Michelisz’s guest status. Jan Seyffert came home fifth, ahead of Marcel Fugel’s Honda Civic Type-R.

Jessica Bäckman finished sixth after a race-long battle with René Kircher’s Volkswagen Golf GTI TCR. The Swede, whose opening race lasted a mere two corners after contact with Gruber and Buri, piled on the pressure all race before eventually making it past Kircher at the chicane in the final minute.

The next round of the TCR Germany season takes place at Hockenheim on the weekend of 19-20th September.

Thanks to his podium, Dominik Fugel now leads the points standings on 71 points, one ahead of Proczyk. Seyffert is now third, 19 points adrift with Buri and Gruber the big losers from the weekend in fourth and fifth respectively.