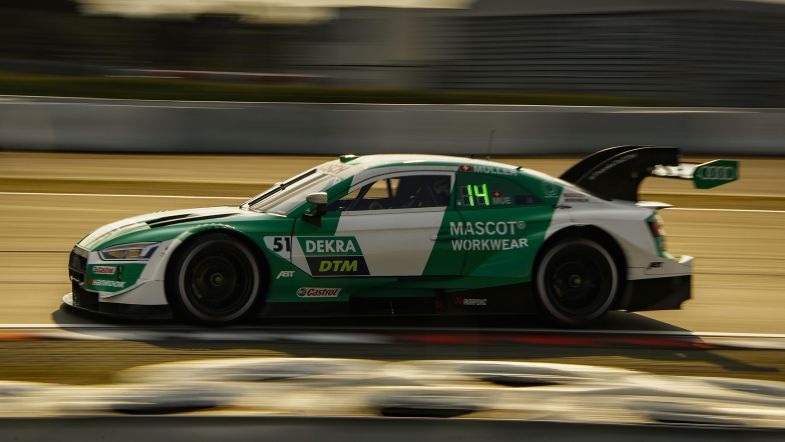 Audi Sport Team Abt Sportsline driver Nico Müller had no rival to take his fourth victory of the season in Race 1 at the Nürburgring.

WRT’s Ferdinand Habsburg was found guilty of blocking Team Phoenix’s Loïc Duval during the qualifying session, with the Austrian receiving a five-place grid drop penalty and being demoted to eleventh place on the grid. BMW Team RMR’s Jonathan Aberdein started from the pit lane as his mechanics broke the post-qualifying parc fermé.

There were no surprises at the start, with Müller making his pole-position count to take the lead, ahead of Rast and with Robin Frijns in third place.

Aberdein was the first driver to change tyres, doing so as soon as the pit window was opened at the end of lap five. The South African had recovered four positions from the start of the race.

Müller pitted from the lead at the end of lap 12, with Frijns attacking Rast for the race lead at Turn 1, and the pair colliding. Rast pitted two laps later, leaving Frijns in the solitary lead of the race. The reigning champion returned to the track losing out to Team Phoenix’s Mike Rockenfeller, who had pitted earlier in the race.

Frijns changed tyres at the end of lap 15, returning to the track behind Rockenfeller and in Rast’s grip, whose tyres were already up to temperature. The Team Rosberg driver took Frijns’ inside, with the pair colliding, but with the reigning champion gaining the position.

After the entire field had completed their obligatory pit stops, Müller led comfortably over Rockenfeller, Rast and Frijns. Team RMG’s Marco Wittmann was the best-placed BMW in fifth position.

Rockenfeller started to pay dearly for his early pit stop, losing ground rapidly not only to Müller, but also being caught up quickly by Rast and Frijns who, on lap 20, was already within DRS distance of the 2013 champion.

Rast overtook Rockenfeller for second place at Turn 1 on lap 22, with Frijns also going through a few corners later.

Both Rast and Frijns opened a gap to Rockenfeller, who also lost fourth place to Wittmann at Turn 1 on lap 23. The Team Phoenix driver tried to come back but the BMW driver prevailed in the end.

Frijns started a new attack on Rast with seven minutes to go, with the reigning champion going deep at Dunlop on lap 26 and almost losing out to the Dutchman. Frijns went deep at Turn 1 on the following lap, momentarily overtaking Rast but jumping over the kerb and spinning off the track. He was able to recover on his own power but fell down to fifth place.

The last few laps of the race were spiced up by the fight between Glock and Duval, with the BMW driver overtaking the Audi at Turn 1 on lap 30 for seventh place. Duval tried to recover the position but was unable to do so. Duval’s five-second pit-stop penalty was converted into a ten-second time-penalty as the Frenchman didn’t visit the pits after receiving the penalty.

The positions remained stable until the end of the race, with Müller scoring his fourth victory of the year, ahead of Rast and Wittmann on the podium.

Rockenfeller held his position to finish fourth, ahead of Frijns and Team RBM’s Philipp Eng. Glock was seventh, ahead of fellow BMW driver at Team RBM Sheldon van der Linde, with Duval ninth after his time-penalty was applied.

Team RMR’s Lucas Auer completed the top ten. The Austrian, however, received a four-second time-penalty for leaving the track gaining an advantage, falling to twelfth place in favour of Aberdein.

After Saturday’s race, Müller has extended his lead in the drivers’ championship with 192 points, 43 ahead of Frijns and 52 over Rast.

The DTM returns to the track on Sunday morning for the qualifying session for Race 2 at 10:45 CEST.