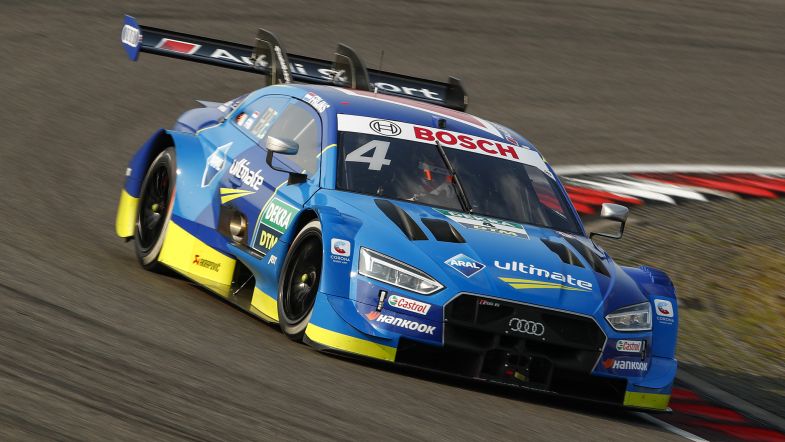 WRT drivers Ferdinand Habsburg and Harrison Newey were excluded from the qualifying results for breaking the parc fermé regulations, with both drivers starting the race from the back of the grid.

At the start, Müller made his pole position count to take the lead, with his team-mate Frijns in second place fending off the attacks from Team Rosberg’s René Rast.

BMW Team RMR’s Lucas Auer, who had trouble at the start and dropped to the back of the grid, was the first to pit, changing tyres at the end of the fifth lap.

The leading Team Abt Sportsline drivers quickly opened a gap over Rast, with Frijns keeping a one-second distance to Müller.

Müller pitted from the lead at the end of lap 11, followed by Rast, with the Team Rosberg mechanics having trouble with the right rear tyre. Both drivers returned to the track ahead of Rockenfeller, who had changed tyres a lap earlier and, with his tyres already up to temperature, attacked the reigning champion. Rast had to use all the track width to defend from Rockenfeller.

Frijns changed his tyres a lap later, returning to the track behind Müller.

Frijns reduced the gap to Müller, coming right behind the Swiss’ rear bumper on lap 17. The Dutch overtook at the chicane for the virtual lead of the race as Green was the last driver to change tyres.

Meanwhile, Frijns opened a two-second gap over Müller in just a lap.

The situation at the front started to heat up with 15 minutes to go on the clock as Rast was significantly faster than Müller and Frijns, lapping eight tenths faster. By lap 25, the reigning champion was within DRS distance from Müller.

Rast launched his attack at Turn 1 on lap 26, taking second place from Müller, with Frijns five seconds up the road. The Team Rosberg driver made a mistake, going wide at the Schumacher chicane, and almost lost his position but was able to defend from the Swiss.

Further back, Green and Aberdein continued with their battle for seventh, colliding on lap 27 at the chicane. The South African was ordered to give the Briton the position back.

The troubles for Müller weren’t over as Rockenfeller overtook for third place at Turn 1 on lap 30. At the chicane, the Swiss would also lose another position to Duval, falling to fifth place.

At the chequered flag, Frijns took the win, with Rast and Rockenfeller completing the podium.

Duval finished fourth, followed by Müller and Van der Linde as the best-placed BMW. Green was seventh, followed by Aberdein, with Wittmann and Eng completing the top ten.

Müller leads the championship on 205 points, with Frijns 29 points behind and Rast 46 points adrift.

The next round of the 2020 season takes place next weekend, again at the Nürburgring, this time using the sprint layout.