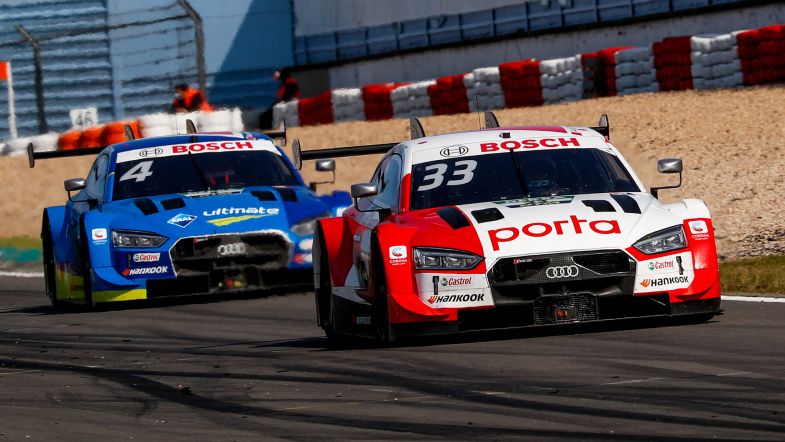 Audi Sport Team Rosberg driver René Rast is “feeling confident” for the next round of the 2020 DTM season – taking place in a week’s time at the Nürburgring sprint circuit – after an improved pace saw him take second in race two on the full GP layout.

Rast was dismayed after his qualifying effort was only good enough for third place on the grid, behind the Team Abt Sportsline drivers.

In the race, the reigning champion settled in third place after the start and continued with a consistent pace throughout his first stint.

Rast changed tyres on lap eleven at the same time as Nico Müller who, after the pit stop, experienced a loss of power due to a faulty sensor. Rast also had issues with a sticking right rear tyre, which caused him to lose extra time in the pit stop.

After both exited the pits, the reigning champion caught up and overtook the Swiss driver and reducex the gap to leader Robin Frijns, but a mistake at the Schumacher S, with Rast going wide and onto the gravel, hampered his challenge and meant he ended up four seconds behind Frijns at the finish.

“I think we got the maximum out of the race on Saturday and so we did today,” said Rast after the race. “Unfortunately, I made a slight mistake today and I slightly ran through the gravel trap, but that didn’t cost me the win.

“Even though it’s only second place again, it’s still a good result. It’s positive that we were faster than yesterday, and I was able to manage my tyres very well. That makes me feel confident for next weekend, because we now know in which direction we need to go.

“I lost about a second in the pit stop and the mistake cost me another two seconds, so yes, I probably lost between two and three seconds in total to Robin, but that doesn’t mean I could have challenged for the win.”

Despite the improved pace, Rast is conscious of the gap to the Team Abt Sportsline drivers, and the task ahead is not easy for the defending champion.

“We have made a step ahead, but it is difficult to close the gap to Nico Müller and Robin Frijns,” he said. “They both have a strong package and don’t make any mistakes.

“If we knew where the difference actually is, we would change immediately. When things aren’t going the way you want it to, you lose some confidence, you start having doubts, you change things, but that isn’t always the best thing to do.”

After the fifth round of the season, Rast lies third in the championship, 46 points behind Müller and nine adrift from Frijns.