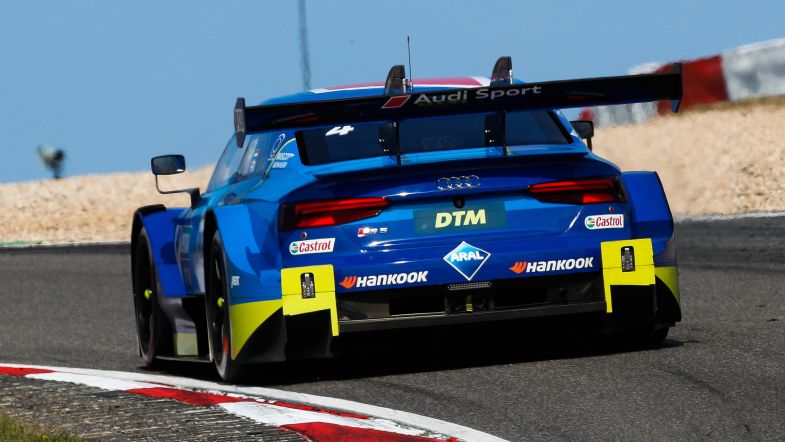 Robin Frijns: “I see myself as a championship contender”

Audi Sport Team Abt Sportsline driver Robin Frijns scored his second DTM victory in eight days on Sunday at the Nürburgring to leave him second in the championship standings.

Frijns has been the strongest driver in qualifying in 2020 and is the only driver to qualify in the top-three point-scoring positions on the grid in all the races held so far this season.

As well as two victories, the Dutch driver has another five podium results in the ten races up to this point.

The Team Abt Sportsline driver qualified alongside Nico Müller and was a strong second to his team-mate for most of the race. However, a faulty sensor in Müller’s RS 5 DTM caused the Swiss ace to suffer a loss of power that allowed Frijns to overtake and disappear into the distance to claim his second victory of the year.

“Victory today feels very different from the one at Assen,” said Frijns after the race. “You don’t really want to win because someone in front of you had a technical problem.

“After the pit stop, I noticed quickly that Nico no longer had the usual top speed. Then, I had no problems getting past. Our Abt team is doing nothing differently, but this weekend, Nico and I obviously had an advantage,.

“Nevertheless, it is a victory. I already had a fast car yesterday. Today, Nico and I were equally fast at the beginning. The gap remained the same. It was very easy for me after he got the problem and I overtook him. I was able to concentrate on saving my tyres and had everything under control.”

The Dutch driver is in second place on the championship, albeit 29 points behind Müller, but still nine ahead of Team Rosberg’s René Rast. With four rounds still to go, anything could happen.

“I see myself as a championship contender,” Frijns told TouringCarTimes. “I’ve been battling since the start of the season with Nico and René. But, because Nico was so strong yesterday, I still lost two points to him, as he extended his championship lead this weekend, so we aren’t closing the gap.

“Still, there are a few weekends to go, let’s see how it goes the next weekend here at the Nürburgring, even though is the short version. We have a good package, so let’s see what we can get.”

“I think Robin can challenge Nico for the championship, his performance is definitely there,” he said.

“But also Nico and René have been at the front since the start of the season and all three are at a very high level, so anything can happen.”