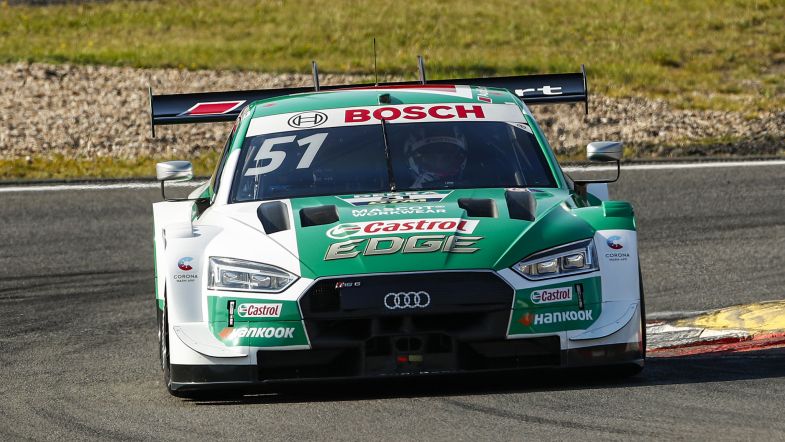 Championship leader Nico Müller continued his strong run of form to lead the second free practice session at the Nürburgring, host of the sixth round of the 2020 DTM season in its sprint configuration, for Audi Sport Team Abt Sportsline.

The session started with frantic activity on the track, as several drivers from both BMW and Audi alternated in the top positions.

Half-way through the session, Müller led the classification with a time of 1:19.943, followed by Team Rosberg’s Jamie Green, barely four-hundredths behind.

The Team Rosberg mechanics had also managed to resolve the gearbox issues that hampered reigning champion René Rast’s progress in the first free practice session, with Rast in fifth place after his first run.

The second run was characterised by plenty of track activity but with no driver improving on their earlier times.

Müller finished the session on top, followed by Green and local hero Mike Rockenfeller, from Team Phoenix, 0.061 seconds off the pace.

Philipp Eng was the best-placed BMW driver in fourth place for Team RBM, with Rast in fifth, 0.168 seconds behind Müller. The Swiss drivers team-mate Robin Frijns was next, 0.265 seconds off the pace.

Ferdinand Habsburg was ninth for WRT, with Team Phoenix’s Loïc Duval completing the top ten, 0.458 seconds off the pace.

The session was very competitive, with the entire 16-car field separated by just eight-tenths of a second.

The DTM returns to track action on Saturday morning for the qualifying session for Race 1 at 10:40 CEST.