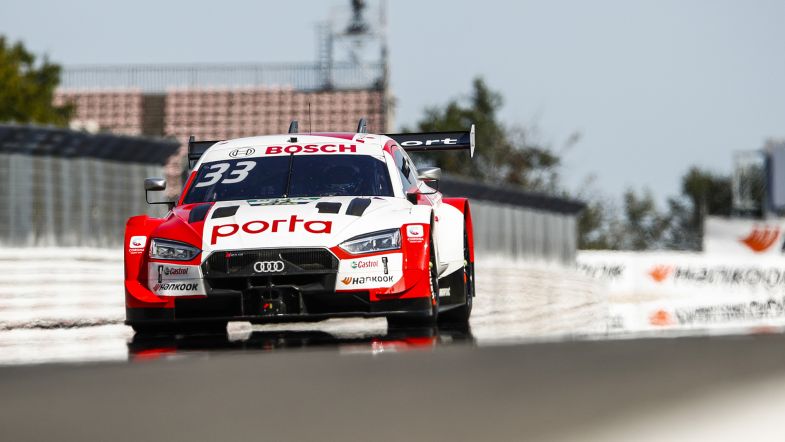 Audi Sport Team Rosberg driver René Rast made the most of a qualifying session at the Nürburgring that was suspended by a red flag to take his third pole position of the season. He headed the time sheets ahead of fellow Audi drivers Robin Frijns and Nico Müller.

Dry weather and warm temperatures welcomed the DTM field at the Nürburgring sprint circuit, a layout where Audi has traditionally been strong.

WRT driver Fabio Scherer was late under braking at Turn 1 as the drivers headed out for their final attempts, beaching his Audi RS 5 DTM in the gravel.

This caused the session to be red flagged, with the stewards deciding to restart the session with just three minutes left on the clock, enough for just one final flying lap.

Rast claimed the top spot as the chequered flag waved on the finishing line with a time of 1:19.472. Frijns was second just one-tenth behind. Championship leader Müller also improved on his final attempt to climb up to third, beating the top BMW driver Philipp Eng by just 0.019 seconds.

Scherer was able to finish the session with the ninth fastest lap time despite his earlier off, with Team RMG’s Timo Glock completing the top ten, half-a-second off the pace.

The start of Race 1 is scheduled for 13:30 CEST on Saturday afternoon.