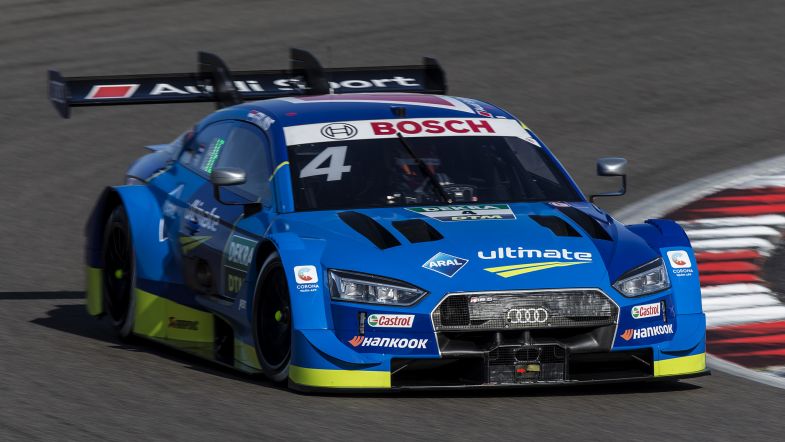 Frijns got off the blocks like a rocket, taking the lead of the race as Rast struggled off the line, enabling Team Abt Sportsline driver Nico Müller to come side-by-side with the reigning champion.

But Müller had to go wide, enabling BMW driver Philipp Eng to gain third position instead.

Timo Glock and Loïc Duval came together after the chicane on the opening lap, with the Frenchman pushing the BMW driver onto the pit entrance. The second collision between both drivers left debris at the last corner, with the safety car called into action.

The race was resumed after two laps behind the safety car. Müller became sandwiched between Team RMG driver Marco Wittmann and Team RMR driver Jonathan Aberdein at the restart, with the Swiss and Wittmann colliding at Turn 2.

Müller spun, luckily not hit by any other driver, and was able to rejoin by his own power.

As the Swiss driver was struggling to progress back up through the pack, Team Abt Sporsline pitted him at the end of lap ten, the first of the championship contenders to do so.

The second safety car intervention came as Duval crashed into the barriers at Turn 5 on lap 16.

All the leaders took the opportunity to complete their mandatory pit stops, with Frijns returning to the track ahead of Rast and Wittmann, who managed to overtake Eng in the pits.

The field circled the track behind the safety car for another two laps and the race was increased in length to 55 minutes plus three laps.

Wittmann attacked Eng at Turn 1 as the race resumed and Rast at Turn 2, to climb up to second place.

Team Rosberg’s Jamie Green took the opportunity to change tyres for a second time during the safety car period that lasted for four laps.

Frijns again controlled the restart to maintain the lead, with Rast taking second place from Wittmann.

Further back, Glock and Green battled hard for ninth place. The Briton pushed the BMW driver off track, having to give the position back. A lap later, Green overtook Glock again, and as the German tried to regain the position, Green closed the door, resulting in heavy contact between the two. Green was forced to retire with suspension damage.

Rast kept the pressure on Frijns for the lead during the last two laps, but the Dutch maintained his cool to take his third victory of the year, with Wittmann completing the podium.

Eng finished fourth, with Müller in fifth position ahead of Aberdein. WRT’s Ferdinand Habsburg made the most of the several incidents to finish seventh ahead of Van der Linde.

Müller continues on top of the championship with 216 points as Frijns is just 13 points behind and Rast 36 points adrift.

The DTM returns to the track on Sunday morning for the second qualifying session at 10:30 CEST.