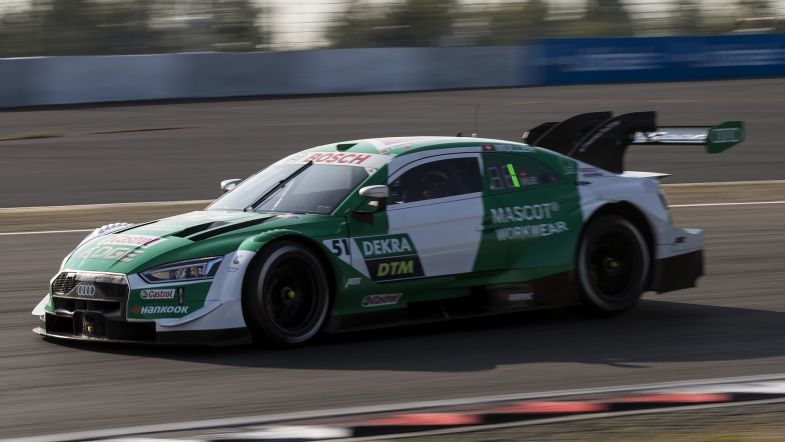 Nico Müller sails to fifth victory of 2020 at the Nürburgring

Audi Sport Team Abt Sportsline driver Nico Müller had trouble free race to claim his fifth win of the 2020 DTM season at the Nürburgring. The Swiss headed team-mate Robin Frijns and Team Rosberg’s René Rast on the podium.

Frijns made the most of his pole position to take the lead as Müller overtook WRT driver Ferdinand Habsburg for second place on the opening lap.

Rast overtook Habsburg for third place at the chicane on lap two, as Kubica received a five-second pit-stop penalty for an incorrect position on the starting grid.

Habsburg continued to lose ground with Marco Wittmann getting past for fifth position a lap later.

Müller meanwhile closed the gap to Frijns, putting the Dutch driver under pressure. The fight between the Team Abt Sportsline drivers allowed Rast to get close to the pair. Müller overtook Frijns for the lead on lap seven.

Kubica retired to the pits at the end of lap eight due to a technical issue.

Müller took a comfortable victory as the chequered flag was waved with Frijns and Rast completing the podium.

With the sixth race weekend completed, Müller leads the championship with 242 points, 18 ahead of Frijns and 47 points ahead of Rast.

Next on the 2020 DTM calendar is a double-header at Zolder, starting on October 9-11.