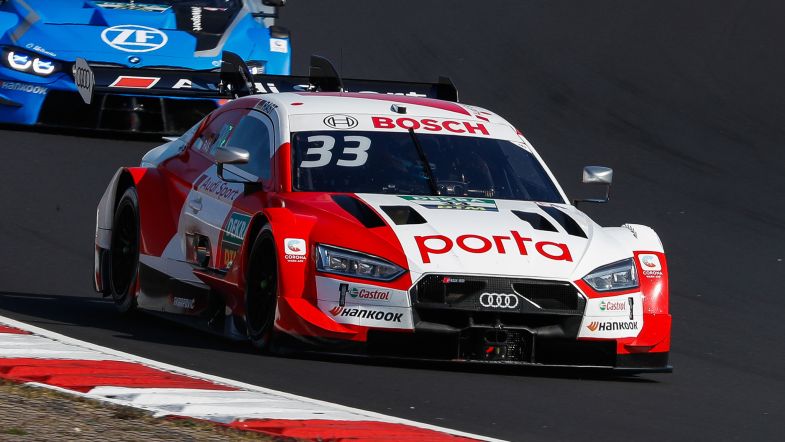 René Rast: “Everything is still open”

Team Rosberg driver René Rast had a frustrating sixth round of the 2020 DTM season at the Nürburgring where, despite two podium finishes, he still lost ground in the championship to his rivals from Team Abt Sportsline. Despite the 47-point deficit to Nico Müller, the reigning champion is not giving up in the fight for the title.

Rast started the weekend with a gearbox oil leak during the first free practice session which prevented him from taking part in the practice starts.

Despite claiming pole position for the first race of the weekend, Rast could only finish second behind Team Abt Sportsline’s Robin Frijns. The second race saw Rast unable do anything to stop his championship rivals, finishing third behind Müller and Frijns.

“Unfortunately, the pit stop didn’t work out perfectly, there was a problem with a wheel nut on the right rear,” said Rast in reference to an issue he has suffered two weekends in a row. “But that wasn’t decisive in the end.”

“In my first stint, I was able to keep up. In the second stint, I was lacking grip from the outset. We didn’t have an answer,” said Rast.

“Yesterday, we were quite fast in the race. Today, I had to fight more again, especially with the second set of tyres,” explained the reigning champion. “I am satisfied with my own performance: I didn’t make a mistake and never gave up, but all in all, we can’t be happy, of course. We have to continue to work hard and catch up.”

“There are six races still remaining, everything is still open. After all, you never know, I am not giving up putting these two under pressure,” added Rast. “That Audi already became manufacturers’ champion today this early is making all of us proud.”

Rast will be racing at the Nürburgring again next weekend, in the iconic 24-hour race, driving an Audi R8 LMS GT3 from Audi Sport Team Land.