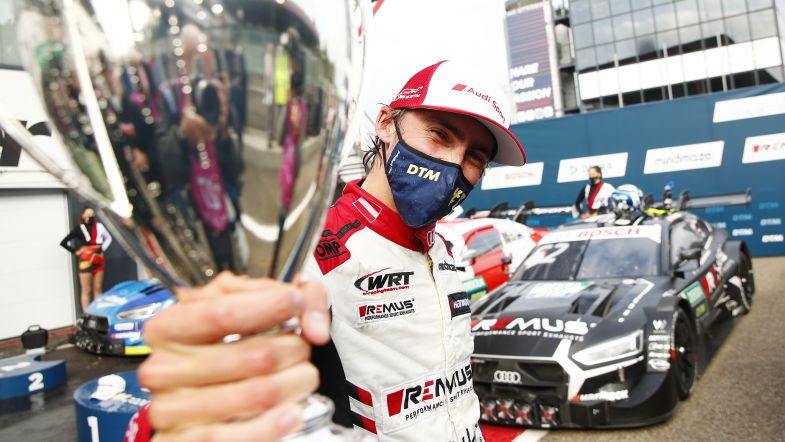 WRT driver Ferdinand Habsburg completed a solid race on Saturday at Zolder to claim the first podium result of his DTM career, finishing in third place after starting on the front row of the grid.

The result is also the first DTM podium for WRT and for a customer team in the series in recent years.

“This morning I was very nervous, but the car felt really good,” said Habsburg. “I didn’t get a good run on my second set because of the yellow flag, but the result was still good.”

The WRT driver settled in second place during the race, with Team ABT Sportsline driver Robin Frijns on his tail. The duo ran together until the pit stop when Frijns was able to get past.

The Austrian was able to maintain the final podium spot, despite losing ground to Frijns and coming under fire from BMW Team RMR’s Jonathan Aberdein in the closing stages of the race.

“I was going flat out from the start, doing my best,” said Habsburg after the race. “It’s not often that you are in the position I had in qualifying.

“I tried to not make any mistakes. When I crossed the finish line, I just kept pushing the radio button, shouting out loud for sheer joy. Surely, my team will have a headache because of that tonight!”

Habsburg’s result comes as a relief to the Austrian after a difficult first season in the series in 2019 with R-Motorsport and a tough start to the 2020 season.

“When you know you can do the necessary to get to the podium, but you don’t get it, it doesn’t mean anything,” said Habsburg. “The fact that you can say ‘Hey Mum, I did it!’ it’s great.”

The result has seen Habsburg climb into the top ten of the championship, currently placed ninth in the classification with 64 points.