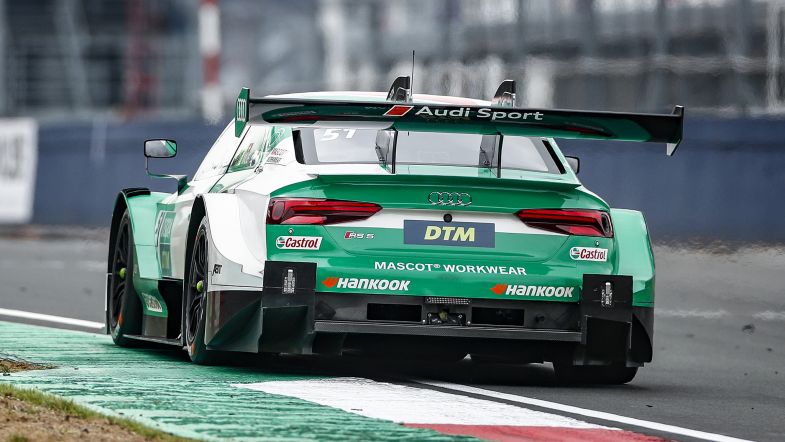 Nico Müller: “We left a lot of points on the table”

Zolder is proving a difficult circuit for Team ABT Sportsline driver Nico Müller, who again had a tough day on Saturday, not only finishing out of the podium, but also losing the championship lead.

Müller could only manage eighth place in qualifying, with the Swiss driver experiencing balance issues in his RS 5 DTM, as well as having a lap time deleted for exceeding the track limits.

“Things didn’t go well already in qualifying,” said Müller. “This week here at Zolder there was a bit more in the car in terms of balance, but still we had no chance to fight for the first two rows of the grid.”

The Swiss got off to a good start but got involved in an incident at Turn 2, falling down to 14th place.

“I took a good start, everything was looking good at Turn 1, felt I had a good exit and was past Harrison (Newey, WRT) already, left a good space and suddenly I got a hit on my right door, got pushed nearly off the track, had to brake on the exit and everybody got past me,” said Müller.

Müller was the first to pit at the end of lap five and suffered the consequences in the closing stages of the race, unable to attack WRT’s Fabio Scherer and came under pressure from WRT’s Harrison Newey to finish in sixth place.

“I had a good strategy, I managed to make up a lot of places, which is important, but again today we left a lot of points on the table and it’s frustrating. On the other hand, there is only one way ahead, and that’s all in, so that’s what we’ll do tomorrow,” said the Audi driver.

Müller has seen the 47-point advantage he had over Team Rosberg’s René Rast after the Nürburgring races wiped out, with the Swiss now in second place of the championship, ten points behind the defending champion.