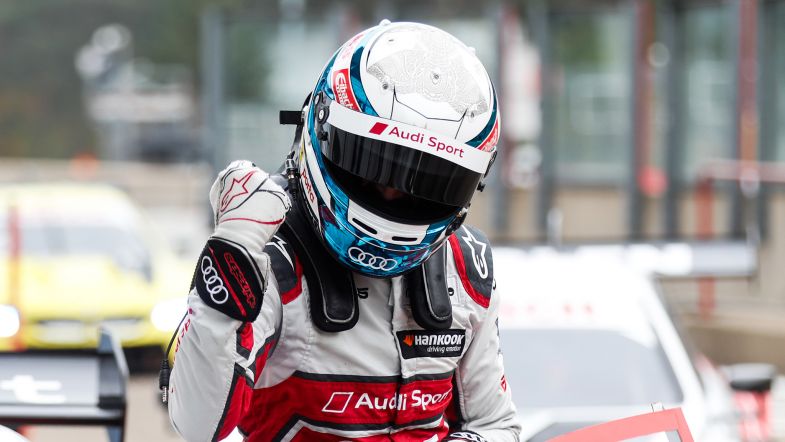 Audi Sport Team Rosberg driver René Rast achieved an important fourth consecutive win, and sixth of the season, on Sunday at Zolder, with the defending champion now the man to beat ahead of the DTM season finale.

The Team Rosberg driver scored 55 out of 56 points in the second weekend of racing at Zolder, recovering from a 47 point deficit after the Nürburgring rounds and heading into the season finale with a 19 point lead over Team Abt Sportsline’s Nico Müller.

“Zolder seems to be our track as it has brought a lot of good success and results,” said Rast after the race. “Turning the tables around like this is something that nobody could have expected.”

WRT’s Ferdinand Habsburg snatched pole position from Rast at the last moment. At the start, the Austrian managed to stay ahead of the Team Rosberg driver.

“I had a good start and was thinking of the lead, but I went onto the gravel and Ferdinand passed me again,” explained Rast. “The SC mixed everything up, it wasn’t so easy to stay cool.”

Both Habsburg and Müller pitted at the end of lap 12, with Rast changing tyres one lap later, a move that allowed him to undercut his rivals and take the lead.

“The key to our success was that both Nico and Ferdinand stopped at the same time, and that allowed me to undercut both of them,” added the Team Rosberg driver. “After my pit stop, I was always looking at the mirrors to see if anybody was coming. The tyres were dying at the end and I wasn’t sure if they were going to last, it wasn’t so easy.

“The issue with the tyres is that, in the heat, we get blistering. But, in today’s (cooler) conditions, we get graining, so we have to learn to deal with both of them. I just hope to not have 30+ degrees at Hockenheim, so we don’t have this kind of problems.”

Sunday’s victory at Zolder is also the 23rd for Rast in his DTM career, equalling two-time champions Gary Paffett and Mattias Ekström, up to Sunday, Audi’s most victorious driver in the series.

“My goal was becoming Audi’s most successful driver ever and catching Mattias,” Rast told TouringCarTimes. “But, until ten days ago, I didn’t think we could win the championship, there is no indication that we could turn it around, nobody expected we could do it, not even us.”

Rast has not only equalled Ekström’s victory record but has also done so in a career spanning barely over four years. Still, the Team Rosberg driver believes that winning the title is more important than achieving a new record in the series.

“The DTM has been different in the last two years,” explained Rast. “In the early 2000s there were more cars and just ten races per year, so different circumstances.

“But I’m very happy to have equalised Mattias. I’d like to get one more win to get ahead, but my ultimate goal is winning the championship. How we achieve that is secondary.”