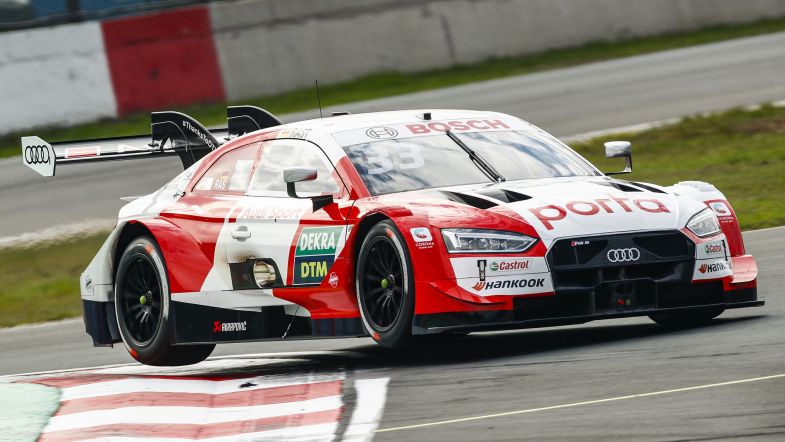 There was no stopping Audi Sport Team Rosberg driver René Rast at Zolder, scoring his fourth consecutive victory of the season in the final race of the Belgian weekend. ART Grand Prix driver Robert Kubica drove a strong race to claim his first podium in the DTM, finishing third.

Pole sitter Ferdinand Habsburg claimed the lead at the start of the race as Rast challenged him by going side-by-side through Turn 1.

But the reigning champion went wide and onto the dirt, enabling the WRT driver to stay ahead. Meanwhile Team ABT Sportsline driver Nico Müller climbed up to third place.

The safety car was called into action on lap two as Team RMR’s Jonathan Aberdein hit the back of Fabio Scherer at the chicane, with the Swiss going out of control and collected Robin Frijns. The Dutchman was immediately out of the race with a broken steering, with the other drivers returning to the pits in the hope of repairing their cars.

The race was restarted after three laps and Habsburg kept the lead at the restart. Team Phoenix’s Benoît Tréluyer hit Team RMR’s Lucas Auer at Turn 1 after the restart, sustaining damage to his Audi RS 5 DTM.

The safety car was then called into action again as Team RBM’s Philipp Eng collided with Auer, with Eng sustaining damage to the front left tyre and had to retire. Auer returned to the pits, but the damage was too much for him to be able to continue.

The race length was increased to 55 minutes plus three laps as result of the safety car interventions.

The race was resumed on lap eleven, with Habsburg leading ahead of Rast and Müller.

Habsburg and Müller pitted at the end of lap 12, with the WRT driver maintaining his advantage ahead of the Swiss when heading back out onto the track. Rast mirrored the move a lap later together with Rockenfeller.

Both returned to the track ahead of Habsburg, with the Austrian overtaking Rockenfeller at the chicane, quickly followed by Müller.

The virtual leaders caught up with Team Rosberg’s Jamie Green, with Rast and Habsburg quickly getting past while Müller got stuck behind. Green was eventually ordered to give Müller the position after he cut one of the chicanes.

ART Grand Prix’s Robert Kubica was the last driver to pit, returning to the track in fourth position.

Kubica lapped significantly faster than Habsburg and Müller, closing in on the duo. Müller activated the DRS at the Jacky Ickx chicane to overtake Habsburg for second place.

Two laps later Kubica had closed the gap to Habsburg and made the move for third place.

With just ten drivers left on the track, WRT called Habsburg for a second tyre change “for safety” on lap 33.

Rast scored his 23rd DTM victory as the chequered flag fell, going equal with with Mattias Ekström and Gary Paffett with the third most DTM wins ever. Müller and Kubica completed the podium.

Rast leads the championship on 304 points, 19 ahead of Müller and 41 over Frijns. The next round will be the season finale at Hockenheim on November 6-8.