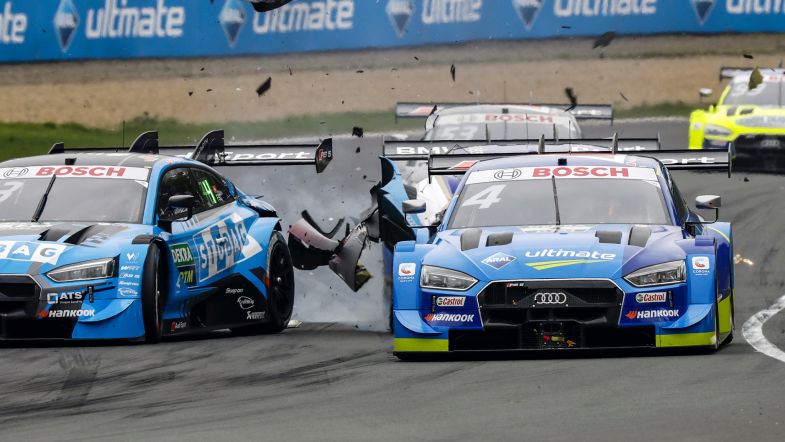 Audi Sport Team Abt Sportsline driver Robin Frijns saw his DTM title hopes take a huge hit after he was caught up in a three-way accident in the second race at Zolder.

Frijns’ race was over early on when the Dutchman was collected by WRT’s Fabio Scherer, after he had been hit by Team RMR’s Jonathan Aberdein. The Dutchman now lies 41 points behind Team Rosberg’s René Rast ahead of the final round of the season at Hockenheim.

Frijns had qualified in third place on the grid, just ahead of Scherer but at the start, Team Abt Sportsline’s Nico Müller overtook both, with Scherer also getting ahead of Frijns and with Aberdein settling in sixth place.

The Dutchman overtook the WRT driver on the second lap but, on the run towards Turn 8, Aberdein hit Scherer from behind, sending the Swiss racer into a spin. Scherer then collected Frijns, who suffered broken steering in his RS 5 DTM and had to retire from the race.

“There was contact between me and Fabio Scherer on the entry to turn eight,” said Aberdein after the race. “It might have been a misjudgement on my part, but I will have to take a closer look at it again to understand what actually happened. It was a disappointing end to what had otherwise been a good weekend.”

“It’s a shame,” added Scherer. “I had a good start and took my position and it was ok. I then struggled a bit with pace, but not too bad, it took me a couple of laps to bring the tyres in, so I think I could have hold P5 quite clearly.

“But, suddenly, I got a hit from the back and I couldn’t do anything different. He (Aberdein) has already been here to apologise, but it’s quite bad what happened. I’m sorry as well for Robin that he got hit by us, so that’s a shame.”

“I had overtaken Fabio shortly before the accident and didn’t even realize what was happening behind me,” said Frijns. “All of a sudden, I felt a hard hit and the race was over. It is very disappointing.”

Aberdein received a three-place grid drop penalty for Race 1 at Hockenheim for the collision.

Frijns is third in the championship, 41 points behind Rast and 22 after Müller, with 56 in contention at the last round of the season.