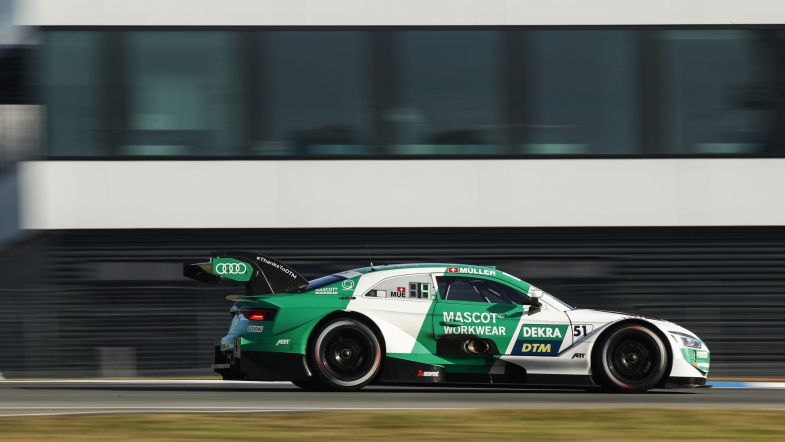 Nico Müller secured a vital win ahead of René Rast in the opening race of the DTM finale at Hockenheim to set up a two-way battle between the pair for the title in the final race of the Class 1 era.

Rast had put his Audi on pole after edging out Müller in the morning qualifying session, with Jonathan Aberdein third fastest before a penalty carried over from Zolder dropped him back down to sixth – and meant Jamie Green was moved up to third.

Title outside Robin Frijns meanwhile would face a huge challenge to keep his championship bid alive, having only managed to qualify down in eighth spot.

When the lights went out, Müller made his intentions clear with a forceful move down the inside into turn one that allowed him to get ahead of Rast into the lead – the two making side-by-side contact as they headed into the NordKurve for the first time that saw Rast forced off wide.

Green held on for third from Sheldon Van der Linde’s BMW but further back, the race would come to an early end for Harrison Newey and Marco Wittmann as they tangled at turn one whilst trying to go either side of Robert Kubica and ended up in the barriers.

Race officials took the decision to bring out the safety car as the two cars were recovered from the barriers, with Müller sitting ahead of Rast at the front, and Frijns down in ninth having lost a place on the opening lap.

The field lined up for the restart at the start of lap six and Müller got the jump on Rast to retain the lead, whilst Van der Linde got a run on Green on the exit of turn one and was able to complete a move to take third from Green at turn two.

That move meant the two top were immediately able to break away at the front and establish an advantage at the front, whilst Frijn’s title bid continued to disappear as he dropped behind Lucas Auer’s BMW into tenth.

With push-to-pass activated, Rast quickly started to put the pressure on Müller and got alongside through the Parabolika on lap seven but couldn’t make a move stick around the outside at the Hairpin.

Frijns meanwhile elected to pit early on, diving in at the end of lap seven in an attempt to make up places through strategy and dropping down to the back of the field in the process.

Rast was able to make his move for the lead on lap nine as he got a run on Müller heading down the Hairpin, with the Swiss racer powerless to defend as the points leader swept through into the lead – and immediately pulled a second clear by the end of the lap.

Behind the top two, Van der Linde was edging away from Green in the fight for third, with Loïc Duval and Aberdein following behind.

Mike Rockenfeller joined Frijns in pitting early and rejoined behind the Team Abt Sportsline man, who was showing the benefit of his decision to make his mandatory tyre change early as he was now lapping quicker than anyone else – becoming the first driver to dip below the 1:31s mark.

With Müller now able to make use of DRS in the same way as Rast had done, the two title rivals again found themselves side-by-side on lap 13, with the pair rubbing wheels at the Hairpin as Müller tried to go around the outside but Rast able to defend to the inside.

Müller then tried a similar move on the very next lap and was again forced wide, as Green made his move on Van der Linde behind to take third spot. Müller again tried the outside line through turn ten but Rast edged him wide to maintain the lead; managing to get a small lead in the process.

Having dropped towards the lower reaches of the top ten, Timo Glock was the third man to pit in his BMW on lap 14 and rejoined behind Frijns and Rockenfeller, with the former still lapping quicker than anyone else as he made the most of the wide open circuit ahead of him.

Van der Linde and Duval were the first of the leading runners to make their mandatory stop at the end of the 16th lap and it was a mark of Frijn’s progress that he found himself ahead of Van der Linde after the stops.

Müller and Green then dived in on lap 17 and rejoined just ahead of Frijns, who quickly cleared Green as the Briton looked to get head into his tyres.

Rast then dived in a lap late from the lead along with Aberdein and when the points leader exited the pits, he rejoined just ahead of Müller – who swept ahead going into turn two having already got heat into his tyres.

Frijns and Green then followed Müller past Rast through the Parabolika, with Green making a move on Frijns at the Hairpin to take second before the lap was done.

Once his tyres were up to temperature, Rast quickly set about clearing Frijns and stuck his car up the inside at turn seven on lap 20 to move back into the podium places and Van der Linde would soon follow suit as Frijn’s decision to pit early saw him start to slip back on his older tyres.

Having cleared Frijns, Rast immediately set the fastest lap of the race and there was no surprise that Green put up little in the way of defence when the defending champion got alongside on the run to the Hairpin on lap 22 to move back into second spot – but with Müller more than three seconds clear up the road.

Rast clearly had no intention of settling for a second spot and took nearly a second out of Müller’s advantage on the very next lap and it wasn’t long before the double champion had closed to within a second of the lead.

Heading into the final ten minutes of the race, Rast was right with the leader as the two championship contenders once again found themselves nose-to-tail.

Using the push-to-pass and DRS to his advantage, Rast reclaimed the lead on lap 28 on the run to the Hairpin, with Green closing in behind as he lapped quicker than the two leaders.

Before Müller could try and make a move to reclaim the lead, the race went behind the safety car for a second time after Glock’s BMW slid off into the gravel at turn 13.

A number of drivers, including Frijns and Rockenfeller, took the decision to pit a second time whilst the field lapped behind the safety car, which headed back in with just two minutes left on the clock.

The two contenders lined-up side-by-side for the restart and Rast left it as long as possible before blasting away ahead of Müller as Green came under pressure from Van der Linde for third. The BMW man couldn’t make a move stick, and instead lost a spot to Duval as he went up the inside at turn eight.

With three laps to go once the clock ticked down to zero thanks to the safety car periods, Müller was with Rast and used the push-to-pass to reclaim the lead going into the Hairpin, and he managed to get enough of an advantage to ensure that Rast couldn’t try and take the place back on the penultimate lap.

Taking a lead of seven-tenths of a second into the final lap, Muller had just enough to again keep the lead at the Hairpin but had Rast right on his tail as the pair headed into the final half a lap.

Müller however was quicker through the final sector to secure a vital race win ahead of Rast to ensure that the pair will go into Sunday’s final day of the season split by 13 points.

Green was able to take third place ahead of Duval, with Rockenfeller’s decision to make the second stop late on allowing him to surge through to fifth spot – taking a place from leading BMW driver Aberdein on the final lap.

Frijns saw his title bid end with seventh place ahead of Robert Kubica and Philipp Eng – with the trio all using fresh tyres to clear Van der Linde in the closing laps as he found himself crossing the line down in tenth spot.

Qualifying for race two will take place at 10:30 local time on Sunday ahead of the season finale.