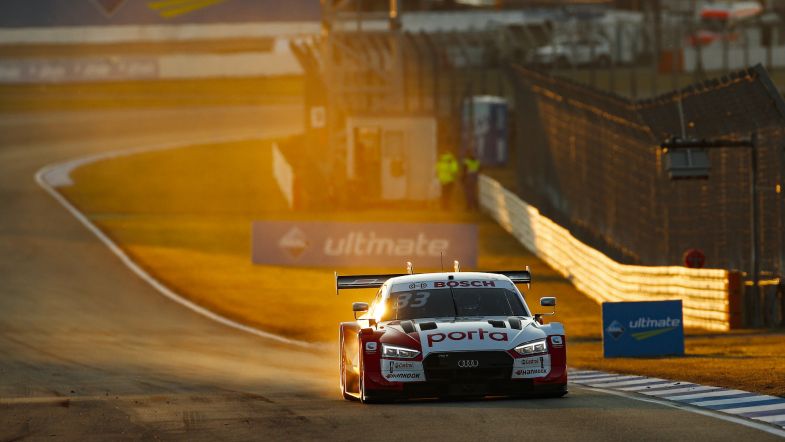 René Rast extends advantage with race one pole at Hockenheim

René Rast has extended his lead in the DTM standings after securing pole ahead of main title rival Nico Müller for the opening race of the season finale at Hockenheim.

Points leader Rast was the first driver on the road when the field headed out for its first run in the session and he immediately set the quickest lap of the weekend by some margin to break into the 1:28s bracket on a 1:28.434s.

Jamie Green also broke 1:29 but was exactly half a second behind, with Müller then matching Green’s time to slot into third place ahead of Loïc Duval and Mike Rockenfeller, with the third title contender Robin Frijns holding sixth as he continued to try and recover from his tough start to the weekend on Friday.

As the leading drivers then returned to the pits, Jonathan Aberdein improved ionto sixth to move Frijns down to seventh spot, with the South African leading the BMW challenge but finding himself almost three quarters of a second off the pace.

With vital championship points on offer, the whole 16 car field headed out for the second qualifying runs, with Müller almost colliding with the BMW of Philipp Eng when he was released from his garage in front of the Austrian – who was forced to jump on the brakes as the Team Abt Sportsline car appeared in front of him.

As had been the case on the first runs, it was Rast who was the first man on the road as he looked to cement his position at the front and secure the additional three championship points on offer for pole.

Whilst Rast was down in the first sector, Müller behind was purple in the opening sector and then went fastest of all again in the second sector as Rast again failed to improve.

Although he went green in the final sector for a new personal best, Müller failed to beat Rast by just 0.019s as he slotted into second – with Aberdein vaulting up the order in the BMW to move into third.

With the clock having ticked down to zero, Rast then improved the benchmark time to a 1:28.405 and although Müller then went quickest of all in sector two behind, the Swiss driver fell 0.048s short of pole and had to settle for second spot.

Pole for Rast for a sixth time this season means he now takes a 20 point lead over Müller into the opening race of the weekend at 13:30 local time.

A 19th career pole for Rast means he now moves clear into third in the all-time list behind Bernd Schneider and Mattias Ekstrom, having gone into the weekend level on 18 poles with Bruno Spengler.

Aberdein would end the session in third spot as the lead BMW but was nearly half a second off the outright pace, with Green and Van der Linde close behind and Eng rounding out the top six.

Duval took seventh spot, with title outsider Frijns having plenty of work to do to keep his slim title hopes alive having only managed eighth – more than seven tenths of a second off the pace. Mike Rockenfeller and Fabio Scherer rounded out the top ten.