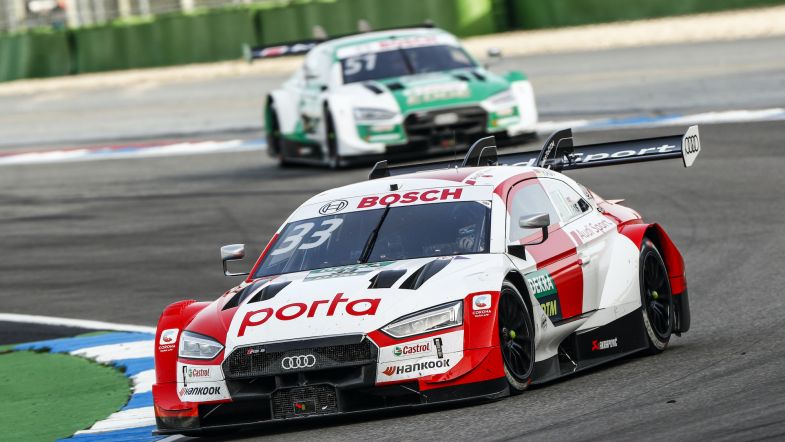 René Rast has extended his lead over Nico Müller to 16 points ahead of the DTM season finale at Hockenheim after storming to a second pole of the weekend.

Müller’s victory in the opening race on Saturday had brought the gap between the pair down to 13 points, making the additional three on offer for pole for the final race of the Class 1 era more important that ever.

As had been the case in the first session, Rast was ahead of Müller on track for the first qualifying run and was on the pace immediately as he all but matched the sector one time that had given him pole on Saturday.

Maintaining his pace through the final two sectors, Rast laid down a strong opening marker on a 1:28.577s – giving him a margin of six tenths of a second over Müller, who was then beaten by Mike Rockenfeller and Ferdinand Habsburg to slip down to fourth on the provisional times.

Rast then went fastest of all through the opening two sectors on the next flying lap but elected to dive into the pits rather than complete the lap, with Müller staying out to improve up to second spot – albeit it briefly as Habsburg again went faster than the Swiss ace when he completed his lap.

With the first runs complete, Rast held an advantage of 0.258s over Habsburg, with Müller just 0.012s behind and Rob Frijns holding fourth – Frijns now out of contention for the title but with a crucial role to play in the championship as support to team-mate Müller.

When the cars then headed out for the final run, Rast improved his time to 1:28.337 thanks to a storming final sector and although Müller also improved, both Mike Rockenfeller and Green improved to get between the title contenders.

Although fastest of all in the middle sector on his final flying lap, Rast failed to improve but his time was good enough to retain pole as none of his rivals behind was able to get close to the defending champion.

Crucially, Müller failed to improve on his time and had to settle for fourth place, meaning he failed to score any of the additional bonus points on offer to lose vital ground in the title race.

“It’s the perfect scenario for us,” Rast said. “Nico has to overtake four people and I might only need fifth place. The cards are on our side but the car was incredible – I have no idea what the engineers did, but it was flying. That was the final session for these cars, and I enjoyed it.”

It was a mark of Rast’s dominance in the session that his second best time would also have been good enough to take pole, with his advantage over Rockenfeller behind just over four-tenths of a second. Green was only 0.016s behind in third place, with Müller 0.002s behind the Briton in fourth.

Jonathan Aberdein took fifth place as the leading BMW driver ahead of Loïc Duval, with Habsburg ending up down in seventh after a wild moment exiting the SudKurve on his penultimate lap of the session saw his car get airborne across the grass before wiping out a trackside marker board, which ended up stuck on the front of his car.

Whilst Green would be well placed to aid team-mate Rast in the title race, Frijns – Müller’s partner at Team Abt Sportline – could only manage eighth place, with Timo Glock and Fabio Scherer rounding out the top ten.

The final race of the season will kick off at 13:30 local time.