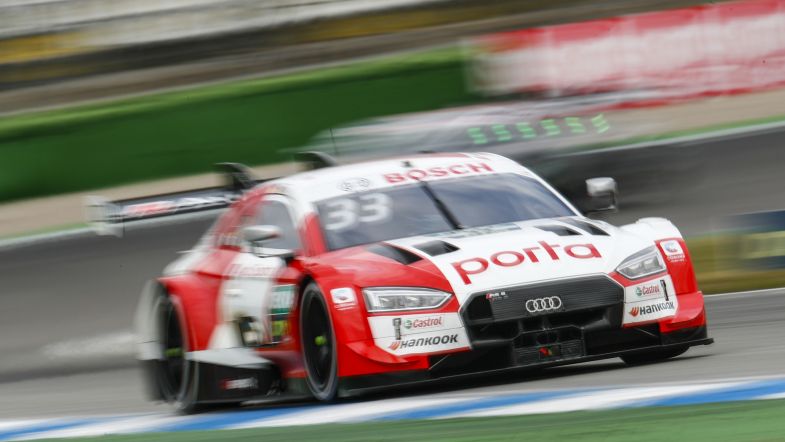 René Rast brought the curtain down on the DTM’s Class 1 era with victory in the final race of the season at Hockenheim, securing the championship title for the third time in four seasons in the process.

Rast’s storming lap in qualifying on Sunday morning had put him in the box seat for the finale, with the four-tenths of a second gap over the field behind being the biggest seen all season.

With rival Nico Müller knowing he had to take a top two finish to stand any chance of the title, the action kicked off with Rast being jumped by Mike Rockenfeller into turn one and Müller immediately jumping ahead of a slow-starting Jamie Green to move up to third – with the Briton forced to defend hard to keep Jonathan Aberdein’s BMW at bay.

Once push-to-pass and DRS were enabled, Rast made his intentions clear as he launched a bid for the lead at the Hairpin on lap three, going around the outside and then running alongside his fellow Audi man before sliding ahead at turn eight – putting a car between himself and Müller.

The defending champion quickly established a slender lead over Rockenfeller at the front, with Müller, Green, Aberdein and Robin Frijns rounding out the top six by the end of lap four.

As Rast edged away at the front, Müller found himself struggling to close in on Rockenfeller and it would be lap eight before he finally managed to get up to the second placed car and was able to use DRS to get ahead going into the Hairpin.

Setting his fastest lap in the process, Müller then set about trying to close the gap to Rast and took four-tenths of a second out of the leader on lap nine, and then a further three-tenths on lap ten to close to within a second of P1.

Down the order, the positions would largely be static through the opening laps, with a rare move seeing Loïc Duval fight his way ahead of Ferdinand Habsburg into the top seven and Frijns clearing Aberdein to take fifth.

The tyre changes started at the end of lap twelve with Lucas Auer, running down outside the top ten, being the first driver to head in for his mandatory stop and Müller got the call to box soon after – coming in at the end of lap 14 whilst Rast continued on track.

Rockenfeller, Frijns and Aberdein all pitted on the following lap to leave Rast and Green on track, and would rejoin behind Müller who had already had a lap in which to get his tyres up to temperature.

Green’s mandatory stop came on lap 16, with Rast the last of the leaders to come in at the end of lap 17. Müller had been pushing hard after his stop and set the fastest lap of the race, meaning that as Rast left the pits, Müller swept through into the de-facto lead – with Sheldon Van der Linde now out front but having yet to stop.

When the BMW finally stopped at the end of lap 19, Müller took over at the front of the pack with a lead of nearly five seconds over Rast – who was well aware of the fact that second was more than enough for the title, even with his rival leading the race.

However, Rast’s fresher tyres meant he was soon the fastest car on track, setting the fastest lap on lap 20 to take more than a second out of Müller’s advantage and then taking further time out of the Swiss ace on the following two laps to gradually close in on the lead.

By the start of lap 24, the gap between the two title rivals had gone and Rast blasted ahead through the Parabolika to reclaim the lead. Before the move had been completed, Müller was reporting a potential issue with his push-to-pass and he seemed unable to respond to Rast having dropped to second and was soon reporting tyre issues on the team radio.

Down the pack, Ferdinand Habsburg was forced to take a trip through the pits for a drive-through for speeding during his mandatory stop, whilst Duval and Aberdein clashed at the Hairpin as the Audi tried to pass the BMW – the pair being forced to swap positions back before Duval completed a clean move for sixth a lap later.

Frijns and Green were also fighting hard for fourth, with Green battling ahead on lap 30 having dropped behind Frijns following the mandatory stops.

As the clock ticked down to signal the end of the Class 1 era, Rast gradually extended his lead over Müller to more than ten seconds and with the championship battle all but settled, the focus instead turned to who would join the two contenders on the podium – with Rockenfeller, Green and Frijns running together.

Green made a late lunge for third around the outside at the Hairpin on lap 35 and despite Rockenfeller trying to fight back on the exit of the corner, Green was able to make the move stick to move up into third.

Rast duly brought his car to the line to secure victory – a win that moves him clear of Mattias Ekström as the most winning Audi driver in series history – and with it the championship title.

That moves him into a share of second on the all-time list alongside Klaus Ludwig and only behind five-time champion Bernd Schneider.

Müller had to settle for second place as he wrapped up the runner-up slot, with Green’s late move on Rockenfeller ensuring that he finished the weekend with a second podium finish.

Rockenfeller held off Frijns for fourth place with Duval completing an Audi 1-2-3-4-5-6 ahead of Aberdein in the best of the BMWs.

Timo Glock, Van der Linde and Philipp Eng then rounded out the top ten, with all 16 drivers making it to the finish.