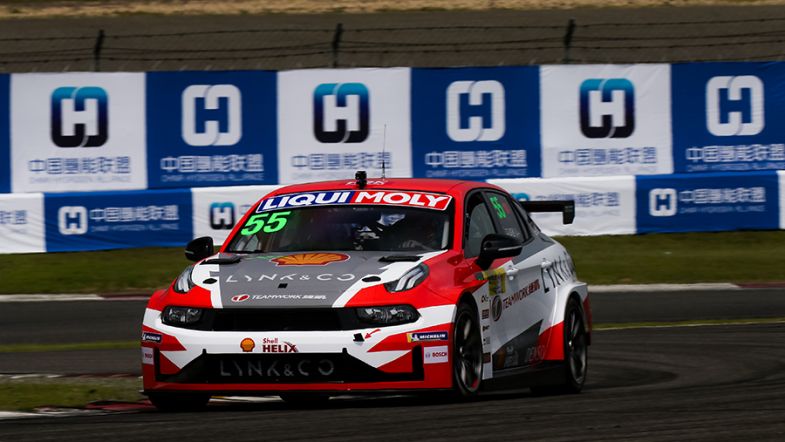 Ma Qing Hua took victory in the opening race of the weekend in Shanghai as the TCR Asia season resumed.

Ma made the best start when the lights went out as Rodolfo Avila was slow away from alongside on the front row of the grid, allowing Sunny Wong to vault up the inside on the run to turn one, and Zhang Zhen Dong to grab third.

Dong wasted little time in then moving ahead of Wong to put his MG into second spot but as Avila tried to follow through, light contact with the rear of the Lynk & Co saw Wong tipped into a spin in front of the field before he was collected by the Audi of Yifan Wu.

Wu would manage to get the damaged Audi going again and return to the pits, but suspension damage would leave Wong stranded on the side of the circuit as the safety car was deployed.

Racing resumed on lap three with Ma looking to try and break away from the pack behind as Dong and Avila squabbled over second place, with Avila managing to get down the inside of his team-mate shortly after the restart to take the place.

Straight away, Avila started to flash his headlights to make Ma aware that he was there, with further intrigue being added to the battle at the front by the arrival of rain.

As Jason Zhang cleared Dong for third, Avila made his move for the lead just as the safety car was called out again due to the rapidly worsening conditions, which resulted in a number of cars diving for the pits for wet tyres.

That included Ma from second spot but he would be the only front-runner to make the call as the others continued on slicks.

All four MGs then pitted together on the following lap, which left Jason Zhang as the leader behind the safety car from the Huffsport Audi of Yang Xi, but Zhang then pitted just as the race restarted on lap seven to leave Xi ahead from Ma.

Ma wasted little time in moving ahead on his wet tyres and as Xi dropped down the order, Liu Zi Chen – brought in to replace Zheng Wan Cheng in the 326 Racing Audi – moved up into second spot and Yang Xiao Wei into third in his RS3 LMS.

With the race running to time, Ma was comfortable at the front and had a lead of more than ten seconds within two laps and he duly wrapped up the victory from 11, with Wang Tao rounding out the podium in his AHRT Autohome Racing Team MG thanks to a late move on Wei for third.

Ma’s victory allowed him to extend his lead in the TCR Asia points with team-mate Zhang down in ninth, and only one of the MG Xpower cars ultimately making the top ten.