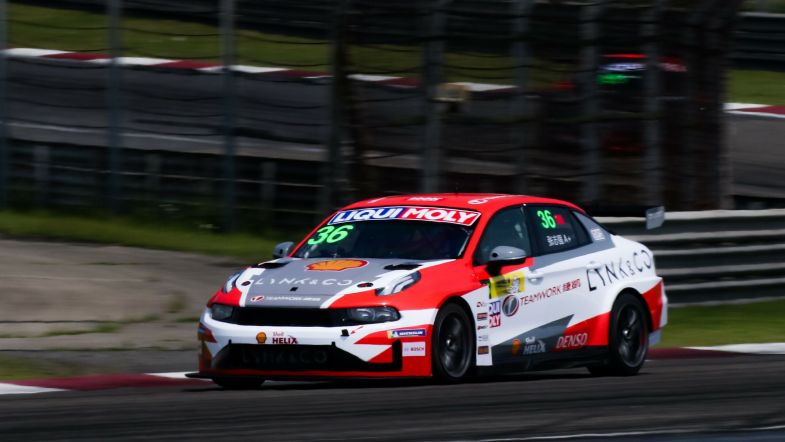 Jason Zhang ended Ma Qing Hua’s run of wins in the TCR Asia series with victory in the second race of the weekend in Shanghai, which would once again be affected by a mid-race rain shower.

On a track that was part wet and part dry, it was Zhang who started on pole in his Lynk & Co ahead of the Volkswagen of Samuel Qiu and Liu Zi Chen’s Audi and it was Zhang who led the field away when the lights went out.

Alongside however, Qiu struggled to get his car away from the line, leading to car behind being forced to scatter in avoidance and jumbling up the chasing pack behind as a result.

Zhang was left with a comfortable advantage at the front from Liu Zi Chen, but he was under pressure from a fast-starting Zhang Zhen Dong in the leading XPower MG – who had started eighth but dived down the inside at the hairpin to take second.

The Audi would quickly drop further down the order as the quick drivers worked their way to the front in worsening weather conditons, with Zhang ending the second lap nearly six seconds clear of Zhang Zhen Dong and with the Lynk & Cos of Sunny Wong and race one winner Ma Qing Hua having moved up to third and fourth.

The latter was under pressure from Rodolfo Avila’s MG however, and on lap three, the Macanese driver nipped back ahead.

The race would then go under caution however, with the sudden rain shower catching out Sunny Wong on the run to the hairpin; the Lynk & Co aquaplaning in the wet conditions before slamming into the rear of Zhang Zhen Dong’s MG.

Wong was out on the spot, with Zhang Zhen Dong bringing his car into the pits to retire, whilst the Audi of Wu Yi Fan and Yan Chuang’s MG would also go off – with the Audi also retiring on the spot.

With Avila running wide out of the final corner as cars struggled for grip, Ma was able to nip through to make it a Lynk & Co one-two, with Avila and Martin Cao behind and the Huffsport Audi of Yang Xi climbing up into fifth.

The positions between Ma and Avila would be swapped behind the safety car as the field circulated at reduced speed before being released to resume racing on lap seven.

As Zhang led the way from Avila, Ma was under huge pressure from Cao, who drew alongside twice through the opening half a lap of the restart but was unable to find a way ahead.

Ma was finally able to get some breathing space, but both Zhang and Avila had been able to break away at the front.

Behind, Yang Xi’s hold on fifth spot would last for a lap before he was tapped into a spin by Yang Xiao Wei at turn one and dropped down the order.

It would prove to be the only key change towards the sharp end in the closing laps, as Zhang wrapped up a second win of the weekend for the Teamwork squad ahead of Avila as the MG XPower squad recovered from the disappointment of race one with a podium finish – and top honours in the TCR China class.