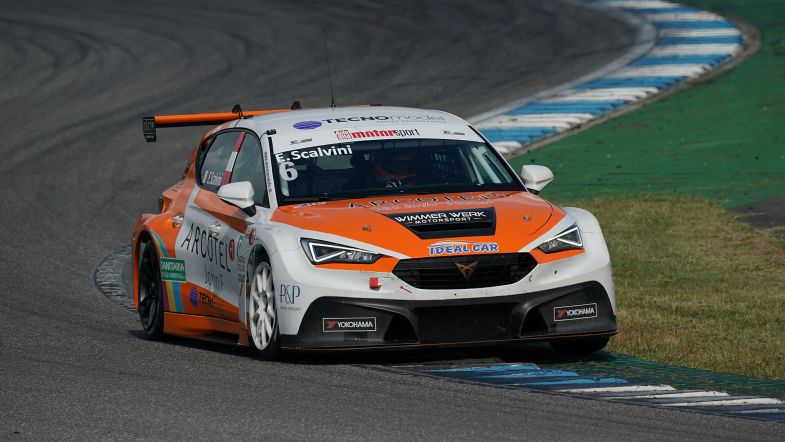 Eric Scalvini claimed his third TCR Germany victory of the season in Race 2 of the penultimate round at Hockenheim.

From pole position, Scalvini led off the line at the start and used forceful tactics to maintain his place from the fast-starting Engstler, with the Hyundai having to take to the inside escape road as Scalvini claimed the line.

Engstler subsequently dropped down to sixth but soon made his way back through the pack, passing Sergio Lopez Bolotin, Martin Andersen and Jonas Karklys to run fourth.

Guest entrant Rubén Fernández Gil had a wild moment entering the stadium section and slewed through the gravel trap, narrowly avoiding contact with the tyre wall before rejoining well down the order.

Scalvini, meanwhile, opened up a slender 0.6s lead over Dominik Fugel and Marcel Fugel in his Cupra León Competición, which the Italian gradually extended over the opening five laps.

The order remained stable until the halfway point of the race until the safety car was deployed following a clumsy incident involving the Honda Civic Type-R TCR of Albert Legutko and Fernández Gil’s R2C Junior Team Cupra exiting the Hairpin.

Legutko had been trying to pass the Halder Motorsport Honda Civic Type-R TCR of Szymon Ladniak but mis-timed his braking and ran wide into the exit escape road.

He rejoined into the path of Fernández Gil on exit, with contact between the two breaking the Cupra’s steering and sending the Spaniard into the inside wall, much to the frustration of Fernández Gil, who sarcastically applauded Legutko on his next lap around.

Legutko’s car was also damaged and the Honda caused another safety car late on in the race after going straight on at the Hairpin with wheel damage.

The initial neutralisation helped Dominik Fugel bridge the gap to Scalvini, but the Cupra managed to re-establish his lead out front at the restart – something he also did after the second intervention.

Similarly, Engstler could not use either safety car to make it past Marcel Fugel, whose defence was solid throughout. The TCR Germany points leader was right on the tail of the Honda but was never close enough to make an overtaking attempt.

Scalvini, however, was in no danger and duly came home to win from Fugel by just over a second at the line.

Behind Engstler, Lopez Bolotin was fifth ahead of Martin Andersen and Karklys.

Robin Jahr was eighth in his Roja Motorsport Hyundai, while Nico Gruber and Patrick Sing completed the top ten.

The final TCR Germany round of the season will take place on the weekend of 5-7 November at the Nürburgring.