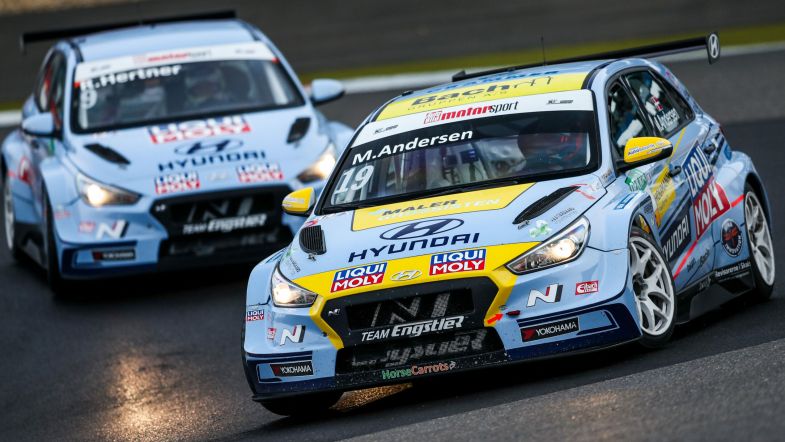 Hyundai Team Engstler’s Martin Andersen claimed his maiden TCR Germany victory in the penultimate race of the year at the Nürburgring.

The Dane led from pole position to beat Team Fugel driver Marcel Fugel to the line by a whopping margin of over 13 seconds, with team-mate Nico Gruber completing the podium in third.

Andersen’s victory is significant as it moves him three points clear of Dominik Fugel – who finished fourth after a drive through penalty – in the battle to finish runner-up to the already crowned Luca Engstler, who is skipping the weekend to focus on his World Touring Car Cup commitments in Adria.

Having claimed pole on Friday, Andersen duly led away at the start but was put under significant pressure from Dominik Fugel on the run down towards the first corner.

Andersen held on and maintained his advantage, gradually creeping away from the chasing Honda who soon had the Cupra León Competición of Eric Scalvini to deal with in the battle for second place.

The pair went side-by-side through Turn 1 and into Turn 2 before Fugel tapped Scalvini into a spin, dropping the Italian firmly out of contention. Scalvini eventually finished last of the classified finishers in 11th, having pitted to survey any possible damage.

That allowed Fugel to take the position, albeit momentarily as the Honda driver was subsequently handed a drive through penalty, sending him down the order and elevating the squabbling Marcel Fugel and Gruber to second and third respectively.

While Andersen was serene out in the lead, the action was concentrate on the Fugel/Gruber scrap for second. Gruber was the faster of the two drivers entering the closing stages, but the Hyundai driver couldn’t quite find a gap around Fugel.

Things nearly came to a head when Gruber went for an overtake between Turns 3 and 4, with the Austrian sticking his nose down the inside of Turn 4 and making contact with the rear of Fugel’s car. Fortunately for both, they carried on without incident, with Fugel just edging second ahead of Gruber at the line by just eight-tenths of a second.

Dominik Fugel’s recovery to fourth was a case of damage limitation, as he now sits third in the standings, three points adrift of Andersen heading into Sunday’s final race of the season.

Behind the second placed Fugel, Robin Jahr finished a strong fifth in his Roja Motorsport Hyundai i30 N TCR, with Patrick Sing sixth ahead of Jonas Karklys’s NordPass Hyundai. All three were split by less than a second at the line following a lively battle.

Szymon Ladniak was eighth in his Halder Motorsport Honda Civic Type-R, while Roland Hertner and Albert Legutko rounded out the top ten.

The final race of the TCR Germany season is scheduled to take place on Sunday at 10:45 CET.