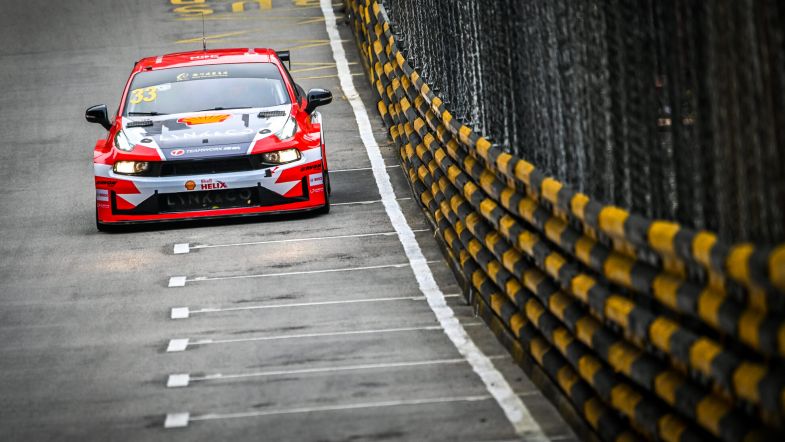 The pair fought tooth-and-nail throughout the closing stages of the eight-lap encounter, the start of which was delayed by around ten minutes due to a grid order issue.

Once the race did get going though, it was action all the way, with Zhang mounting a serious challenge to his pole sitting team-mate towards the end, nearly getting past as the leaders hit traffic.

But Ma held on to secure pole position for Sunday’s Trophy Race, with Zhang electing to maintain a front-row start.

In the context of the TCR Asia title battle, Ma took seven points out of points leader Zhang’s advantage, but the latter still holds the lead ahead of the final round on Sunday.

Off the line, it was Ma who got the best start to lead into Lisboa for the first time, as second-placed starter de Souza slipped back to sixth. That allowed Andy Yan’s Honda to leap up to second and briefly challenge Ma under braking for the sharp right-hander on the opening lap.

Ma held on and opened a slender margin, extended by the fact that Yan had fallen into the clutches of Zhang, who executed a sensational overtake around the outside of Mandarin to take second place at the start of lap two.

From there, Zhang used the remaining laps to close the gap between himself and Ma, eventually getting onto his team-mate’s bumper with three laps to go.

Zhang tried a half-hearted attempt down the inside of Lisboa on lap six of eight but Ma closed the door. Zhang tried again on the following lap, but his best chance came as Ma hit traffic between Paiol and Police Bend as backmarker Qi Liu had nowhere to go.

This had the desired effect for Zhang, as Qing was forced to jam on the brakes, allowing the second of the Lynk & Cos to get to within touching distance. But Ma managed to extend his gap exiting Melco, and with a third overtaking attempt unsuccessful at Lisboa, Zhang backed off.

With the action frenetic at the front, the scrap for third went almost un-noticed behind but it was no less fierce.

Having dropped to sixth following a botched start, de Souza showcased his local knowledge by mounting a superb recovery to fourth by the final lap. He closed onto the back of Lo Sze Ho’s Hyundai i30 N TCR and looked like making a move into Lisboa on the last lap.

But de Souza couldn’t get far enough alongside and settled for fourth by the flag.

Jactin Ho Hin Chung brought his Honda home seventh, comfortably ahead of Andy Yan who faltered in the closing laps, with Wu Yifan and Kiang Kuan Wong completing the top 10.