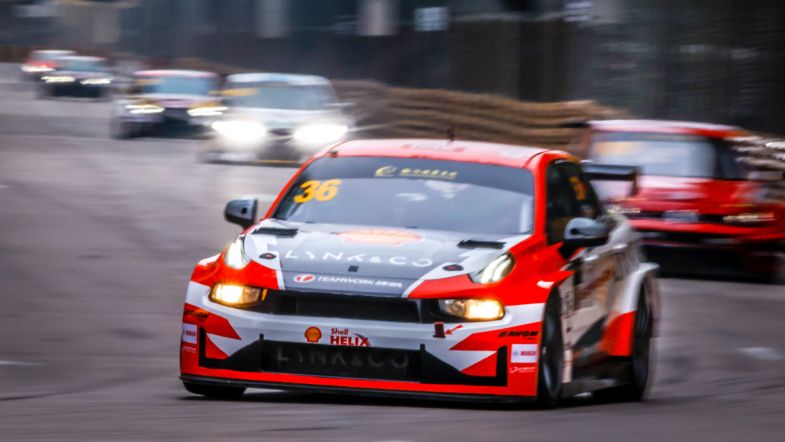 Zhang had been running second to team-mate and Race 1 winner Ma Qing Hua after a mistake cost him the lead in the closing stages, but Ma then suffered a front-left puncture on the final tour.

The places remained the same as Zhang did not attempt to pass Ma’s ailing car until the Hyundai i30 N TCR of Lo Sze Ho arrived on the scene, with Zhang left with no option but to increase his pace and pass Ma before going on to take the victory.

Ma just completed the podium in third, having limped home to finish 40 seconds adrift of the win.

With victory, Zhang secured the TCR Asia title ahead of chief rival Ma.

Having dominated the qualification race on Saturday, Ma got a similar start off the line, leading from Zhang and the Z-Challenger i30 N TCR of Lo Sze Ho and the third Lynk & Co Racing Team car of Sunny Wong as the field headed through Mandarin for the first time.

Wong’s incredible start was rewarded with second place under braking for Lisboa, allowing Ma to leap away in the lead, but Zhang quickly made it back ahead on the following lap to begin his pursuit of Ma in the lead.

That was aided as Ma made a mistake and saw his erstwhile five-second margin reduced to just over four-tenths of a second from Zhang who, with renewed vigour, began to pressurise the back of Ma’s car approaching half-distance.

On the fifth lap of 12, Zhang got in the draft of Ma through Mandarin and subsequently breezed down the inside of his team-mate to seize the lead, with Wong also getting by for second.

Ma eventually got back ahead of Wong for second and then benefitted from a mistake from Zhang himself to reclaim the lead with just four laps remaining. Wong’s race unravelled soon after though as he was forced into the pits. He eventually finished the race with two front punctures.

Although Ma was back in the lead, the pressure from Zhang persisted and the pair were nose-to-tail heading onto the final lap. But Ma suddenly slowed with a front-left puncture approaching Lisboa for the last time.

Bizarrely, Zhang remained in second place, seemingly happy to allow Ma the victory while he wrapped up the title. The plan came unstuck however, as Lo Sze Ho had closed on the pair around the final lap, which forced Zhang to overtake Ma, who eventually came home third.

Now in the lead once more – and with a healthy car – Zhang returned to full pace and duly took the win some 1.89s ahead of Ho at the flag.