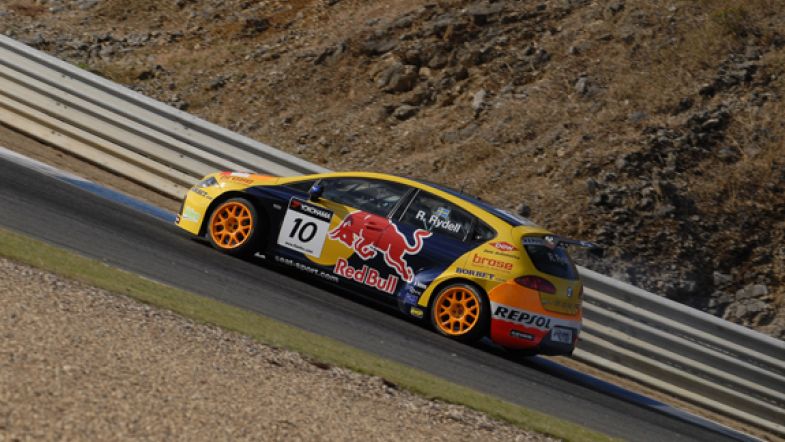 Rydell made an excellent start, to win his first race of the WTCC season at Estoril. Rydell had better pace into the first corner to take the lead ahead of polesitter Nicola Larini. Rob Huff then tried to take second but clashed with Jordi Gené’s SEAT Leon. The result of this was Huff dropped from a potential second to 6th.

The action further back at the start was as exciting as that going on at the front. Farfus collided with team mate Jörg Müller, and then got hit again causing a spin, and retirement shortly afterwards. Tarquini was also involved in a collision that put him to the back of the racing pack, and as a result finished outside of the points for the first time this season.

Muller had a great start taking second position only a few laps in from 8th. He held second for a short time but couldn’t hold off Larini. Muller had originally passed Larini for second but could not hold it as the race went on and Larini’s Chevrolet found the pace it was missing off the start line.

Huff had a great start to fight for second into the first corner, however found himself in 6th after a tussle Gené’s SEAT. He fought back two places to finish the race 4th finally passing Gené who finished just behind Huff in fifth position.

Current independents leader Hernández damaged his bonnet after a collision early in the race. Stewards decided to call him in for repairs, however after leaving the pits with the bonnet repaired, it flew off and forced Hernández to retire.