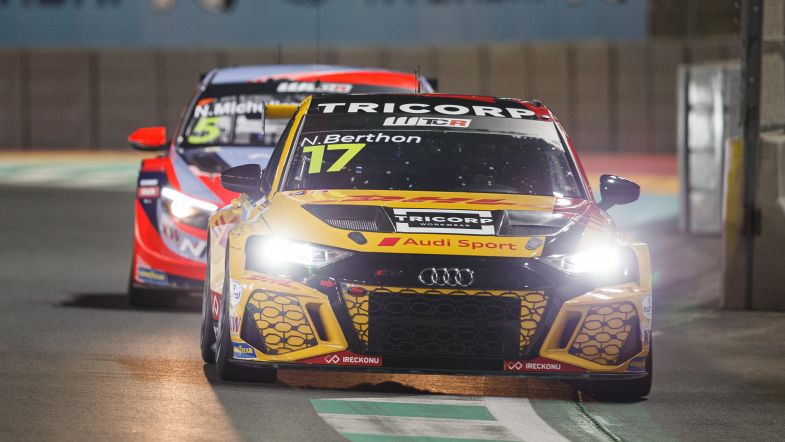 Nathanäel Berthon: “One mistake and he would have overtaken me”

Comtoyou driver Nathanaël Berthon (Audi RS 3 LMS II) claimed his second victory of the 2022 FIA WTCR season in Race 1 at Jeddah, a victory far from easy despite starting from the pole position.

Berthon led from the start, but was under pressure from second-placed Norbert Michelisz (Hyundai), who attacked the leader on four occasions, and was on the Audi’s tail for the first half of the race.

“Norbi wasn’t taking it easy, he put a lot of pressure on me,” Berthon said after the race. “One mistake and he would have overtaken me.”

The Frenchman has been fast all weekend, claiming his first pole position of the season yesterday and now a victory, a result he credits to the team effort throughout the weekend.

“I’m very happy for this win, for the team of course, the did an amazing job, my crew, Comtoyou and Audi Sport,” added Berthon. “And congratulations to Norbi, he was very fair all the race, always a good competitor.

“And, of course, my Tommy (Coronel), he was right behind and he was there to help me, so I’m super happy for him that we are together on the podium for the last dance of the season,” concluded the Comtoyou driver.

Berthon sits in third place in the championship, just five points behind Münnich Motorsport’s Néstor Girolami in the fight for the runner-up spot.