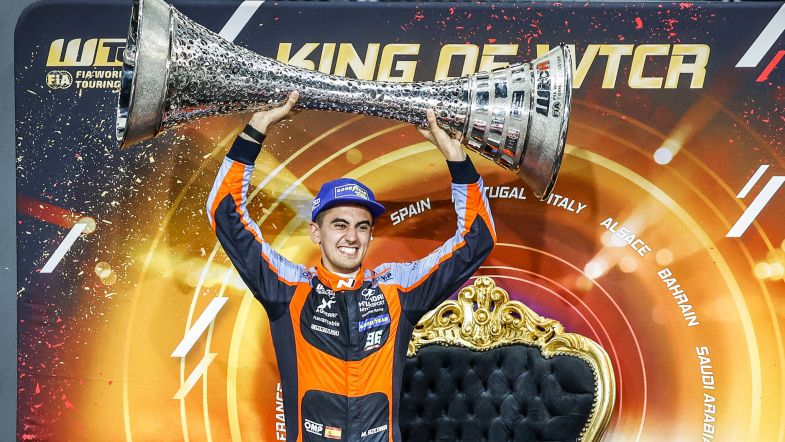 Mikel Azcona: “I’ve worked all my life for this”

BRC Racing Team’s Mikel Azcona clinched his first – and set to be only – FIA WTCR drivers’ title in qualifying for the final round for the series in Jeddah.

In his fourth season in the series, and the first racing for Hyundai, the Spaniard was left elated over the most important achievement of his life having wrapped up the crown before racing gets underway.

Azcona qualified in third place for Sunday’s opening race, but was crowned champion as his main rival Néstor Girolami was unable to progress into Q3.

“Honestly it’s something that I was working for a long time, basically all my life,” the Hyundai driver said after the qualifying session. “I have to thank mama and papa, my family, my girlfriend, everybody who is supporting me all the time, which is many people.

The 2022 champion also praised his team-mates and crew, who he credits for the support and preparation to win the title in his first season with BRC and Hyundai.

“Since the first moment I entered into the team I had a very good welcome, since the first day with Norbi, with everybody in the team, my mechanics, everybody,” added Azcona. “If you are next to the good people good things are coming. I have to thank everybody on the team for all their jobs, not only at race weekends, but also Monday to Monday.

“I have to thank Norbi as well for a great season working together. He’s been a fantastic team-mate and a fantastic friend. It’s unbelievable to have that kind of person around you. I would say if you are around these kind of people good things are coming and this trophy is because of them. So thank you to Hyundai Motorsport and BRC, and now I am world champion and it’s a fantastic feeling.”

Azcona arrived in Jeddah with a comfortable 60-point advantage over Girolami, with 65 points in play, but that didn’t make the task at hand any easier for the Hyundai driver.

“Even having 60 points difference you are obviously nervous because it’s the world championship and you want it, you don’t want to finish second,” explained Azcona. “As a race driver you want to win and you want that result. Even if I have this good margin I was a bit worried.”

The Spaniard was also happy to become the last champion of the WTCR era, before the competition moves to the TCR World Tour.

“The last year and season of WTCR, to win the championship is incredible,” he said. “We will see what happens in the future but for the moment I will try to enjoy probably the next month.”

Azcona has now 305 points to his name, 68 clear of Girolami and 95 ahead of Berthon.