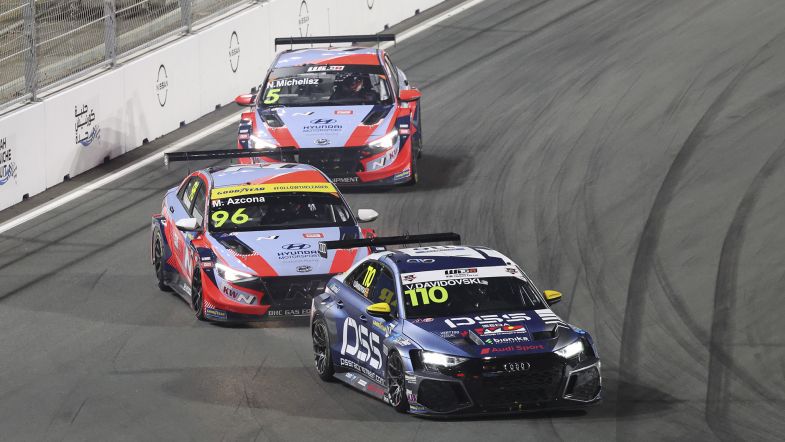 Viktor Davidovski: “Driving in the WTCR was incredible”

Viktor Davidovski completed his WTCR debut with a podium result after crossing the line in second place in Sunday’s Race 2 at Jeddah.

The Macedonian believes world touring car debut was “incredible” and is hoping for more.

The Macedonian, with extensive experience in touring car racing at an European level, joined Comtoyou Racing for the last two rounds of the 2022 FIA WTCR season.

“The experience of driving with the best touring drivers in the world was incredible!,” Davidovski told TouringCarTimes.

“The level is very high and I had to redouble my efforts to do it in a good way.”

The preparation to compete in the WTCR wasn’t easy for the Macedonian, not only having to get used to a stronger competition, but also to the Goodyear tyres, as opposed to the Kuhmo tyres he is used to from his TCR Europe campaign.

“I think the most difficult thing was the circuits that were new to me and also the tyres that are totally different from the ones I use in TCR Europe,” added the Comtoyou driver. “But together with my coach Franco Girolami, we did a lot of simulator sessions and that helped me get in shape.”

At Jeddah, Davidovski qualified in ninth place after being competitive all weekend. He started from the front row in Race 2, and defended second place from 2022 WTCR champion Mikel Azcona (Hyundai), finishing the season on the podium

“It was a big pressure for me to be defending the position with the recent World Champion Azcona,” explained the Macedonian.

“But I was able to handle the pressure very well and have him behind me.”

While it’s still too early to talk about the next season, the Audi driver has already set his sights on continuing competing at an international level.

“Right now, I want to enjoy this, at 42 years old it was almost impossible: winning a race in TCR Europe and a podium in WTCR,” added Davidovski.

“My wish is to continue in the European championship together with Comtoyou and Audi and why not, continue dreaming even a little more.”