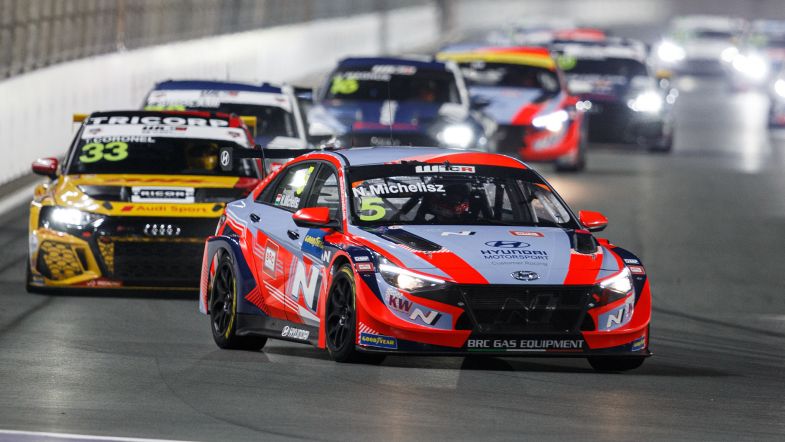 Norbert Michelisz: “I tried to do a clever race”

BRC Racing Team driver Norbert Michelisz (Hyundai Elantra N TCR) managed to finish in second place in Race 1 at Jeddah, despite fighting tyre wear and fending off Comtoyou’s Franco Girolami for the second half of the race.

Michelisz started from the second spot on the grid, keeping his position in the initial stages, but soon mounting his attack on leading Nathanaël Berthon (Audi RS 3 LMS).

“I was hoping that Nathanaël made a mistake, but he did a super job and the victory is well deserved,” said the Hungarian after the race.

“I tried to do a clever race,” explained the Hyundai driver.

“In the beginning, for the first two or three laps, he had a better pace than me, but then I started coming into the rhythm and closed the gap two or three times. I was always trying to not overstress the front tyres, because always with these cars, if you are too close to the car at front, you start to struggle with temperatures, also the brakes and the tyres, so it was a game of cat and mouse for the first 16-17 laps.”

Michelisz’s efforts weren’t enough and, in the second half of the race, Girolami’s challenge for second place became the Hungarian’s biggest problem, with the Audi driver coming side-by-side on the main straight on two occasions.

“But then, unfortunately, after the fourth round, I did not have anything left, so I had to really look more to the back, I was feeling the pressure but, thankfully, it was enough to hold off for P2,” explained the Hyundai driver.

Berthon’s victory ahead of Michelisz means that the Hungarian won’t be able to target the third position in the drivers’ championship, with the Hyundai driver now focussed on defending fourth place from Zengo Motorsport’s Rob Huff, just nine points behind.