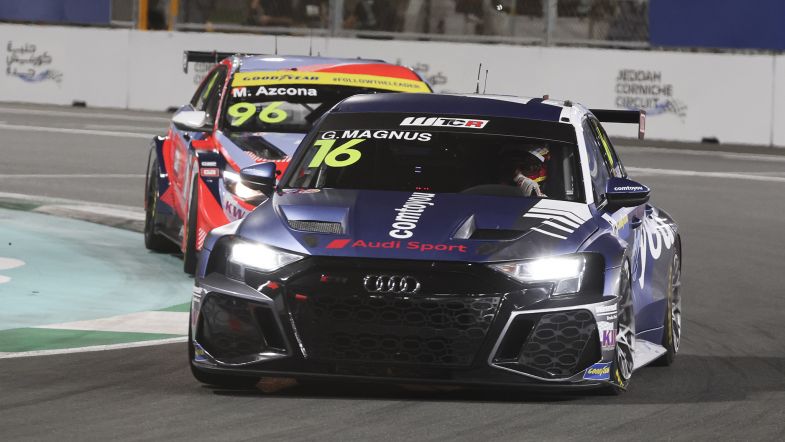 Comtoyou Racing driver Gilles Magnus claimed the victory in the last-ever of the FIA WTCR, which ended behind the safety car after an incident between Audi driver Nathanaël Berthon and Cupra driver Rob Huff.

The Macedonian soon lost out to his team-mates Gilles Magnus and Franco Girolami. Guerrieri tried the inside at Turn 1 on the second lap, spinning off the track, leaving Catsburg in second place. The Dutch driver came under fire from Franco Girolami.

Girolami tried the inside at Turn 1 on lap three, locking the rear wheels and collected Catsburg and Tassi, with the three retiring to the pits. Magnus now led the race ahead of Davidovski and Hyundai’s Mikel Azcona in third place.

Further back, the drivers fighting for the runner-up spot in the championship, Comtoyou’s Nathanaël Berthon and Münnich Motorsport’s Néstor Girolami were up to sixth and eighth places.

Magnus opened a gap at the front, with Davidovski coming under fire from Azcona on lap seven, as Zengo Motorsport’s Huff fended off Berthon’s attacks.

Azcona closed to Davidovski, whose straight-line speed was enough to defend on the main straight. The Spaniard collided with the Macedonian on lap ten, with the Audi driver recovering and keeping ahead of the Hyundai.

Berthon dived into Huff’s inside on lap eleven, running wide and losing again to the Briton. The Frenchman grew increasingly frustrated as he was unable to find a way past Huff.

Magnus built a comfortable gap at the front, as Azcona was told by the team to save tyres, taking the pressure off Davidovski. Further back, Néstor Girolami also had a hard time keeping Zengo Motorsport’s Dániel Nagy behind.

Berthon overtook Huff on the outside of Turn 1 on lap 15 while going on the outside of the chicane, later giving the position back. The Frenchman launched his car at Huff’s inside on lap 18, damaging his front right suspension, with Huff managing to continue. The safety car was called into action as there were just three minutes left on the clock.

With Berthon out of the race, Néstor Girolami secured the runner-up spot in the championship, and allowed Nagy to overtake him: “He deserves it, he’s been really respectful in our battle, so thank you very much.”

The race finished under the safety car, with Magnus taking the victory ahead of Davidovski, with Azcona in third place.

“I needed this, for the team, for myself, for my confidence,” said Magnus. “Bahrain was difficult, and here I made a mistake in the Q3, so I was really needing this.”

“This is an amazing weekend for me,” added Davidovski. “Maybe I put too much pressure on myself but, after three laps, I was able to continue and this is amazing.”

Azcona finishes the season with 337 points, 83 ahead of Néstor Girolami, with Berthon third final, 97 points adrift.