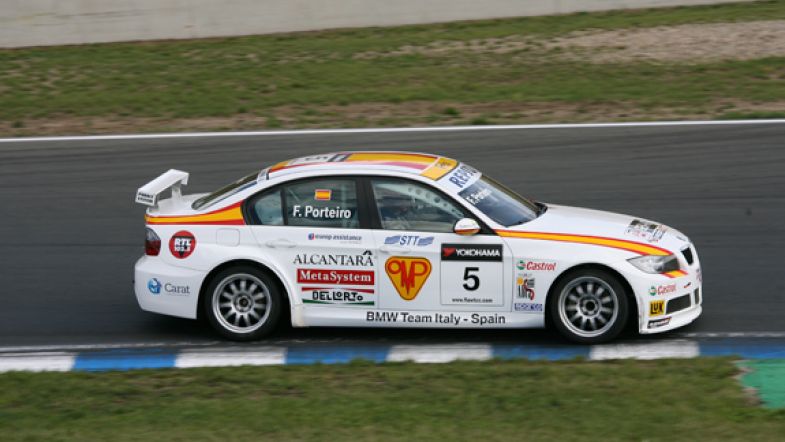 BMW Italy-Spain driver Félix Porteiro managed to lead the race from pole to an impressive win in the second race at Oschersleben (the first for him so far in this season), holding off a charge from behind. He escaped all the drama at the first corner after having a brilliant start, and led from Tom Coronel in the SUNRED SEAT away from the chaos.

It seemed to be that everyone piled into one another into the first corner, leaving Tiago Monteiro and James Tomspon out of the race almost immediately. Augusto Farfus had an excellent start from eighth on the grid, but he was pushed wide at the first corner and had to chase after the leaders.

Other drivers involved in first lap incidents were Alessandro Zanardi, Ibrahim Okyay, Rickard Rydell and Olivier Tielemans. One to benefit was independent Sergio Hernández who ended up in fourth position by the end of the first lap. Stefano D’Aste also took advantage of the chaos and cut through the corner to rejoin the race inside the top ten. Hernández did not stay in fourth place, but even after being overtaken by the faster cars he ended the race in seventh position.

Coronel finished the race in second place, having bravely resisted pressure from Robert Huff, and even chased Porteiro for the win. He drove a fantastic race, on a circuit where he has historically always found success. Huff came up from seventh position on the reversed grid to take the final podium spot, but he had to overtake an extremely stubborn Jordi Gené, and defend his position from an advancing Farfus.

Gené drove an excellent and brave race as he fought off car after car defending his position. Huff may have overtaken him, but Farfus, and later Andy Priaulx were not able to get by. He kept Farfus at bay for lap after lap; only for the Brazilian to be caught by surprise by Priaulx who overtook him. Following this move the British driver hounded Gené, but the Spaniard kept his ground to score a great fourth position.

Priaulx took fifth, with Farfus behind him in sixth. Hernández took seventh, and the win of the Independents’ race. Yvan Muller finished in eighth position scoring one precious point for the title fight. He had been fourth for a few laps, but he could not find the pace and slipped back down the field.