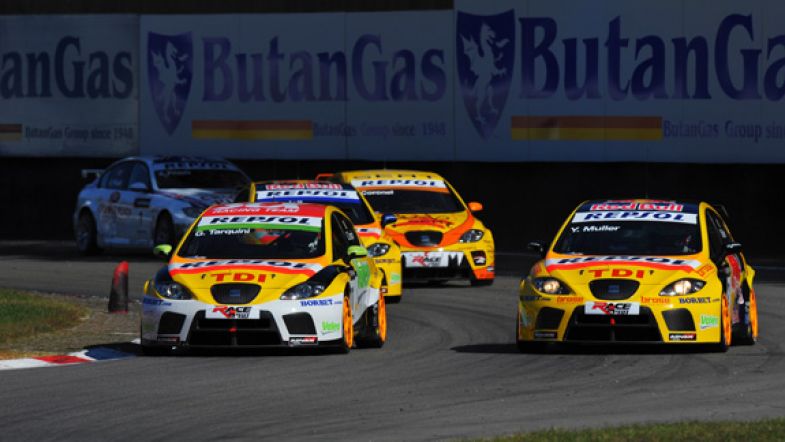 The FIA World Touring Car Championship-title will for the first time ever be taken by a SEAT-driver. But the question is who. Yvan Muller or Gabriele Tarquini. One race remains of the 2008 season, Macau, and Muller leads the championship with 100 points compared to Tarquini’s 86. 20 points are still at stake but with Muller’s point gap of 14 points, Tarquini is facing a tough job.

No other driver in the WTCC is able to clinch the title ahead of the two SEAT-drivers.

Muller and Tarquini have been following each other through the entire season. The season started with the two drivers taking the championship lead on the same points, 14.

However, as the season came to the half point, Muller started to pull away. At the sixth race at Estoril, Muller scored 14 points while Tarquini scored none at all.

Muller vs. Tarquini – The Facts

Both drivers have won three races this year. If they end up on the same points after the final race, the driver with most wins will be the champion.

If Tarquini takes one more second place and they end up on the same points, the driver with most third places will be champion. Currently both have one third place.

If all of these procedures fails to produce a champion, the FIA will nominate a winner.

More facts from the WTCC-organisation:

If Gabriele Tarquini wins the title:
– he would be the first Italian World Champion in circuit racing, 17 years after Teo Fabi in the 1991 World Sportscars Championship
– he would be the eighth Italian automobile World Champion after Nino Farina and Alberto Ascari (F1), Mauro Baldi and Teo Fabi (Sportscars), Roberto Ravaglia (Touring Cars), Sandro Munari and Miki Biasion (Rally)
– he would be third driver ever to win both the World and the European Touring Car Championships after Roberto Ravaglia and Andy Priaulx