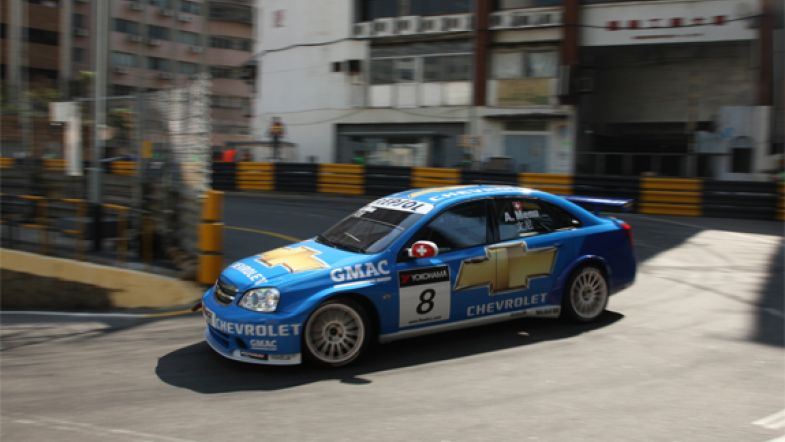 Yvan Muller is the new World Touring Car Champion! The Frenchman finished in third, while Alain Menu wrapped up the win in the first race at Macau. Muller’s last remaining rival in the battle for the championship, Gabriele Tarquini, finished in seventh.

At the start of the race, the complete field of cars had no problems going through the Lisboa corner. Menu was leading from pole ahead of Andy Priaulx and Robert Huff.

On lap 2, Robert Huff tried to go round the outside of Andy Priaulx in the Lisboa corner. Priaulx denied the move to Huff, forcing the Chevrolet driver to hit the barier lightly. Huff dropped back to fifth, behind Rickard Rydell and Yvan Muller. In the mean time, Masaki Kano crashed his BMW in the Lisboa corner, going into the tires head on.

Lap 4 saw Yvan Muller close in on Rickard Rydell. Muller tried to overtake the Swede on the start/finish straigth, but Rydell blocked his team mate. This allowed Robert Huff and Augusto Farfus to put pressure on Muller, but the Frenchman was not impressed. A couple of corners later Muller got passed Rydell, as the Swedes car suffered technical problems. He had to retire in the pits.

Two laps later there was problems again at the Lisboa corner. Takayuki Aoki and Jaap van Lagen were battling over 15th, but made contact and spun. Aoki had to retire, while Jaap van Lagen was able to continue and finished in 21st.

On lap Alex Zanardi crashed on top of the hill, ending his race in which he was already outside the top 10.

While Augusto Farfus managed to overtake Robert Huff going into lap8, Andy Priaulx closed the gap to race leader Alain Menu. But it was too late for the Briton, as Menu didn’t make any mistakes and managed to stay ahead untill the finish flag.