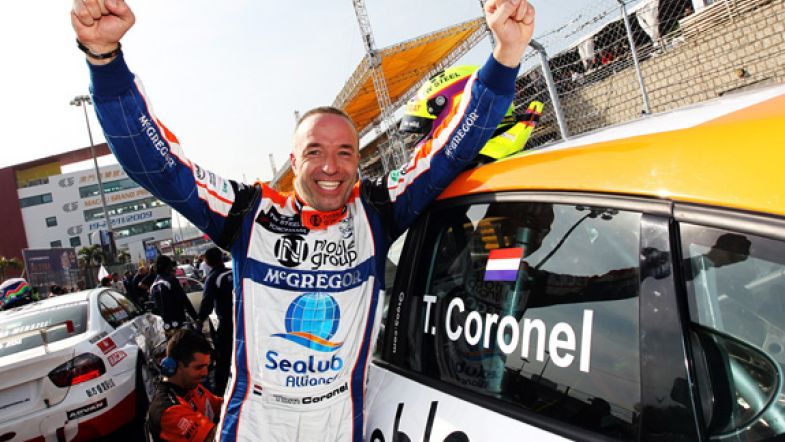 Flying dutchman Tom Coronel secured the Yokohama Independents Trophy at Macau despite a crash in the final race at Macau.
“From the first day that we arrived here it all went fine. That gives you a good feeling straight away,” said Coronel.

Coronel won the independents class in the first race at Macau and looked quite set for the title.

“Immediately after the podium ceremony I had to jump in the car again for the second race. This one would be far more eventful,” said Coronel.

But a collision with team mate Tom Boardman in the second race quickly turned things around as his main rival Félix Porteiro was ahead of him.

“The excitement started for me when my teammate Tom Boardman spun just ahead of me. His car was like a pinball between the armcos.

There was no way I could avoid him. His race was definitely over, but I managed to get the car back to the pits,” said Coronel.

Coronel pitted to get a new radiator and was several laps down. The race was then red flagged due to the incident between his rival Porteiro and Franz Engstler and André Couto.

“Fortunately he was unhurt, but when I saw he was out I knew that despite my position outside the points the championship was mine,” said Coronel.

Coronel has had a very strong season this year, despite the earlier financial problems that almost forced him to sit out the Asian races. Fortunately Coronel was able to complete the season and claim his second consecutive independents title.

“In fact today’s second race was the only zero points score of the year! For me that was the key to winning the title, always be there take home some points.

All in all it was a good and fair season in which we had to fight hard to get our results. Together with all our sponsors we managed to make it to the end of the season and win the title. A World title and for me it could not be better!” said Coronel.