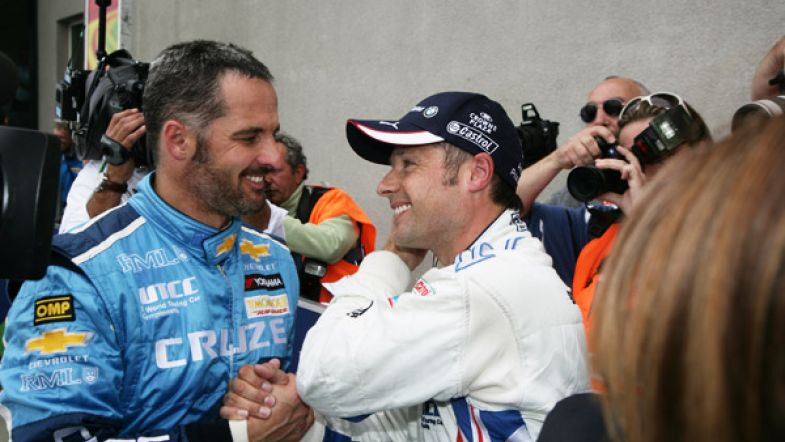 Chevrolet win appeal, BMW are thrown out of Japan

Chevrolet have won their challenge against BMW in the court of appeal, with both BMW Team RBM cars disqualified from Japan for running with an illegible car. The ruling means Yvan Muller cannot be caught in the final round.

Chevrolet attended the FIA International Court of Appeal on Friday to protest against BMW Team RBM and the WTCC stewards’ decision at Japan, after the BMW team managed to find a loop hole in the regulations that allowed them to compete with a sequential shift 6-speed gearbox for the first time. As a result, the team were also able to drop the weight of the car including success ballast to 1,168kg. The weight allocated to new shape BMW 320si’s at Okayama would otherwise have been 1,198kg.

Andy Priaulx had taken his first pole position in almost four years with the lower weight, but rain on Sunday had wiped out the performance advantage of the rear-wheel drive BMW, and Priaulx dropped to second in race one behind Chevrolet’s Rob Huff, and then slid out of race two, scoring just 18 points compared to title rival Yvan Muller’s 30 at the weekend. This would have left Priaulx with a tough challenge at Macau to be able to win his fourth championship.

The decision of the FIA International Court of Appeal has ruled the BMW Team RBMs were illegal, as they were never homologated to race with a six-speed gearbox, and therefore should never have been permitted to race. If they had formally submitted new homologation papers, the car would have been subject to an increase of 30kg on it’s base weight. Also the penalty ballast which had been calculated seperately for Engstler Motorsport’s Andrei Romanov also is deemed to have flouted the rules, as Romanov’s car is just as inelligible.

West Surrey Racing had requested at the start of the year to run their BMW 320si with the 6-speed sequential gearbox as they use in the BTCC for Colin Turkington, and to be eligible for championship points should they do so, but their request was dismissed by the FIA as the car was “Not homololagated by the manufacturer (except for Zanardi)”, and so the team fitted a five-speed manual for their campaign.

Speaking to TouringCarTimes, Chevrolet Motorsport Manager Eric Néve said:
“The case couldn’t be clearer…they have homolaged their car with a five gear gearbox, and to run with a six gear gearbox they should have homologated it and they have never ever submitted a request for homologation, nor have they paid the fee to homologate that gearbox. The only dispensation was for Zanardi because of his handicap. So the BMW 3 series must be equipped with a five gearbox except for Mr. Zanardi who is allowed a six speed gearbox with a special gear lever and hydraulic clutch.”

“Romanov has been running a car with a six gear sequential gearbox and BMW thought if Romanov has done it, first with Tim Coronel, and then Romanov for six events, if everyone has been happy with that the gearbox has since become legal, but I’ve seen thousands of people crossing the road when the sign is red and it still doesn’t mean that it is legal.”

“The fact that we are fighting on the track doesn’t mean we will allow people to run illegally if we think they are…if there is somebody to blame it’s them (BMW) for failing to homologate that gearbox.”

The revised standings will put Yvan Muller 55 points ahead of former SEAT team-mate Gabriele Tarquini, whilst Andy Priaulx would drop to third place, 61 points behind. There are only 50 points remaining at the season finale in Macau, which means Muller will be unchallenged, although he won’t be declared champion until after the race weekend at Macau.

Chevrolet will also be on target to win their first manufacturers’ championship in the WTCC, as they will be 74 points ahead of SEAT Customer Technologies, with only 86 points left in that category.