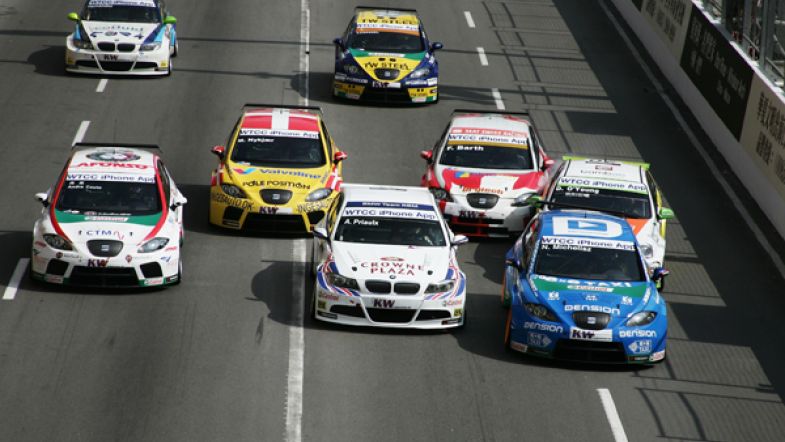 Norbert Michelisz wins his first WTCC race at the final round of the season from outgoing champion Gabriele Tarquini.

Michelisz lined up fourth on the grid directly behind Alain Menu’s Chevrolet, and made a sensational start, getting around the Swiss driver who failed to get away from the line.

Michelisz and Tarquini both outdragged the BMW of Kristian Poulsen, who had started from pole down to the first corner, and of the two Michelisz found himself in the lead in the blue Zengo Motorsport León TDI.

Later on the first lap, Andrei Romanov created a pile-up at Police, which brought out the red flag. With the two Bamboo Engineering cars right behind the Russian and taking significant damage, both cars were out and so ended the teams slim chance of the independent teams’ championship.

After the race restarted, Poulsen continued to fall back, not fighting hard against the Chevrolets of Yvan Muller and Rob Huff, but the Danish driver would later lose further ground and would fall out of contention for the indie crown.

The independents title went to Sergio Hernández for the second time, with the Spaniard going on to take the win in the independents’ class race as well.

Yvan Muller allowed team-mate Rob Huff past, who was trying to catch-up to Tarquini to regain his second place in the drivers standings. Huff was caught behind Farfus for two laps, making contact into the back of the BMW at Lisboa and receiving an bad-sportsmanship flag as a warning.

The lap 6, Huff made a clean pass on Farfus for third place and now had to chase down the two SEATs which had pulled out a lead.

Yvan Muller would follow through three laps later to finish fourth, whilst Andy Priaulx put together a sensational unsighted drive to finish seventh from the back.

Huff caught up with Tarquini with one lap to go, but had already missed his best passing opportunity. Although the Chevrolet followed the SEAT closely throughout every stage of the final lap, Huff couldn’t find a way past, and Tarquini finished second and reclaimed second in the championship by way of a points tie with Huff, with Tarquini having five wins to Rob Huff’s three this year.

Norbert Michelisz had a relatively quiet race after the start, and held on to take his first WTCC victory at his final opportunity, becoming only the third SEAT driver to do so this season.