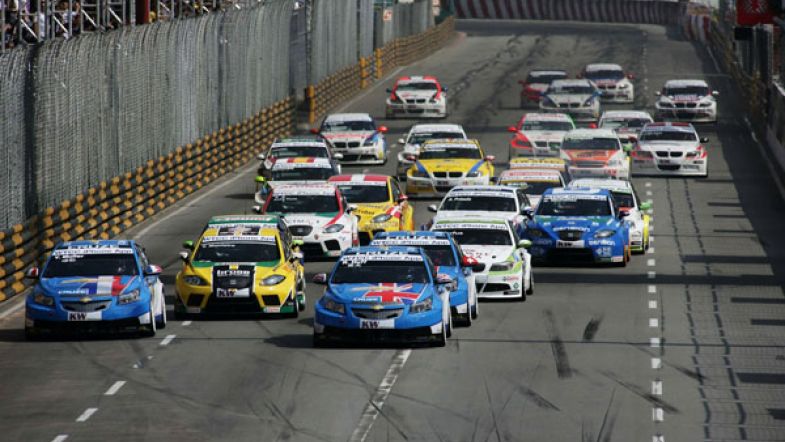 Rob Huff won the first WTCC race at Macau and jumps to second in the drivers standings, whilst Chevrolet wrap up the manufacturers championship.

At the start, BMW Team RBM driver Andy Priaulx was knocked into a spin as André Couto cut across the front of the BMW at the first corner. The ensuing carnage also took out Michel Nykjaer and the safety car was deployed to clear the wreckage.

Further on during the first lap, Tiago Monteiro was running alongside Alain Menu heading into Lisboa fighting for third place, Menu broke too late and went into the barrier, managing to reverse out and rejoin in 15th.

At the restart four laps later after the wrecks of Couto, Priaulx & Nykjaer had been cleared, Huff drove away comfortably from team-mate Yvan Muller, whilst the battle behind raged on.

Sergio Hernández had dropped down to fifth of the independent runners, and Darryl O’Young looked set to haul in the Proteam driver in the independent standings, until the Bamboo Chevrolet was knocked into a spin by the SEAT of Tom Coronel. O’Young tried desperately to hang on to the car, but careered into Fredy Barth, taking them both out of the race at Lisboa.

Gabriele Tarquini made good progress, passing Augusto Farfus for fourth to secure a SEAT 3-4 behind Monteiro, but with Huff and Muller finishing 1-2, that was more than enough to secure Chevrolet their first WTCC manufacturers championship.

A late safety car meant the race was reduced to a procession for the final two laps, though during this time Tom Coronel was ordered to serve a drive through penalty for his contact with O’Young, taking away a potential front row starting position for the Dutch driver in race two as punishment for his move.

Alain Menu had recovered from 15th to 7th, and will start on the front row alongside independent BMW driver Kristian Poulsen, who won his seventh independent race of the season, and can still mathematically win the title if Sergio Hernández has a poor result in race two, and Poulsen holds on to the independent win.

With Barth and Nykjaer out early on, Norbert Michelisz had already won the inaugural WTCC Rookie Challenge before the race was over. The Hungarian driver also passing Farfus in the final stages to finish in fifth place.

Rob Huff’s victory also catapults him to second place in the drivers championship, three points ahead of Gabriele Tarquini.