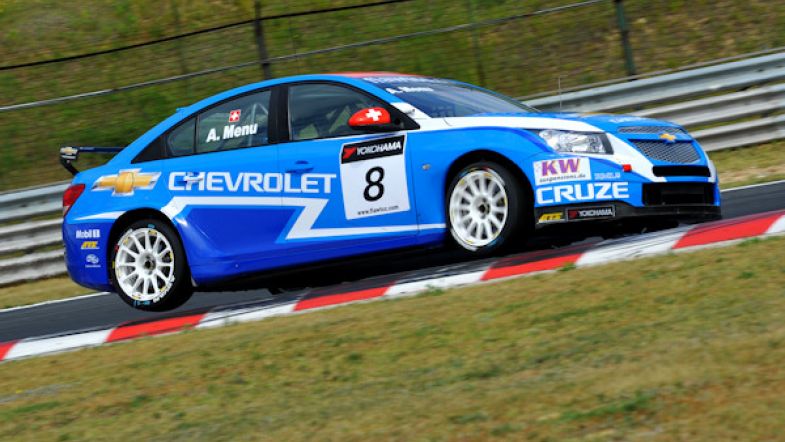 Alain Menu has won the first race in Hungary ahead of packed grandstands who turned out to see Norbert Michelisz, who drove from sixth on the grid to second.

Villa then slid wide into Tom Coronel who in turn tapped Yvan Muller’s Chevrolet into a slide at Turn 1. The end result saw Michelisz out of the first corner in second place with Gabriele Tarquini in the SUNRED Engineering SEAT León TDI up to third from ninth on the grid.

Further back it was an unlucky start for Robert Dahlgren, who appeared to be pushed wide into the gravel trap on the opening lap. The Volvo recovered to the pits for repairs and rejoined later in the race to ensure it was ready to take part in race two, where it will start ninth.

Menu briefly built up a lead in his Chevrolet Cruze, but Michelisz closed in to the crowd’s delight and challenged the Swiss driver for a few laps before falling back to finish in second position, one second down.

Darryl O’Young in the Bamboo Engineering Chevrolet and Tom Coronel were in a fierce fight further down the top ten, but O’Young, along with SUNRED’s Michel Nykjaer and Proteam’s Mehdi Bennani, were given drive-through penalties for missing the apex at Turn 14.

Coronel’s race wouldn’t last much longer after O’Young finally took his penalty at the end of lap 8, with an apparent puncture for the ROAL Motorsport BMW 320 TC.

The main battle throughout the race though was for third place, with an off-the-pace Tarquini holding up Javier Villa’s BMW and the two Chevrolets of a recovering Yvan Muller and Rob Huff. On the final lap, Villa made his move, passing the Italian with slight contact. The 2009 Champion quickly fought back a few corners later and Villa was forced wide off circuit, but the former GP2 star drove back on circuit into the side of Tarquini’s SEAT. Behind, the Chevrolets re-ordered themselves in the chaos with Huff passing Muller, and both of them moved ahead of Tarquini as he recovered from his confrontation with Villa.

Villa crossed the line in third with Huff chasing him down finishing fourth, with Muller fifth and Tarquini sixth.

It was a great result for SUNRED with four cars in the points, with Tarquini and Monteiro sixth and seventh, and Fredy Barth and Pepe Oriola finishing eighth and tenth in the new 1.6 litre turbo Leóns.

Rob Huff still leads the championship with 132 points from Menu who’s now up to second on 104.