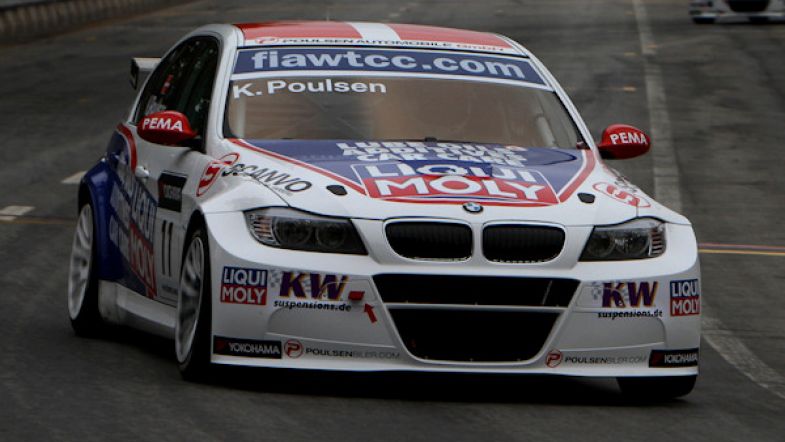 Kristian Poulsen bows out on a high

Kristian Poulsen seals the 2011 Yokohama Independents’ Trophy at Macau, after just missing out on the title at the final race last year, and announces he’s stepping down from the WTCC.

Poulsen finished third in the independents’ class in race one which was good enough to secure the Yokohama Trophy before the second race.

“It was close last year, but this year has been a really good season,” said Poulsen to TouringCarTimes. “The team and me have done a really fantastic job from the start. The car was prepared from the first race in Brazil to win.”

This year has been one of the closest in the independents’ Championship, with just two points separating the top five after Oschersleben, but a strong weekend two weeks ago at Shanghai saw Poulsen come to Macau with a strong lead, even despite double points on offer for the independents’ challengers.

“There are many good drivers, you never know what happens before you finish that’s why in the second race I backed off totally and tried to get it home.”

In the first race, Poulsen was running second in class behind Michel Nykjaer, when he was passed by Liqui Moly Team Engstler team-mate Franz Engstler, as the two team mates continued to work independently.

“We’re in the same team but we both race for the Championship, when he was pressing me I just let him past and then hoped that he and Michel (Nykjaer) could make a mistake or start fighting and then I can pass.”

“In the start crazy things happen, two cars (André Couto & Alain Menu) hit each other at over 200km/h and I was really lucky that if I hadn’t gone full on the brakes, (Couto) would have hit me as well.”

Poulsen also confirmed that this will be his last season in the FIA World Touring Car Championship, standing down due to other commitments after three full seasons.

“I’ve sold the car, so I’m stopping. If you have to do this Championship, it’s a full time job and we have a family company where I work and a lot of travelling as well, and this is too much for a hobbie driver, you have to be a professional. Next year I’ll stay home with the company and with the family and I just got a beautiful little daughter so it’ll be nice.”