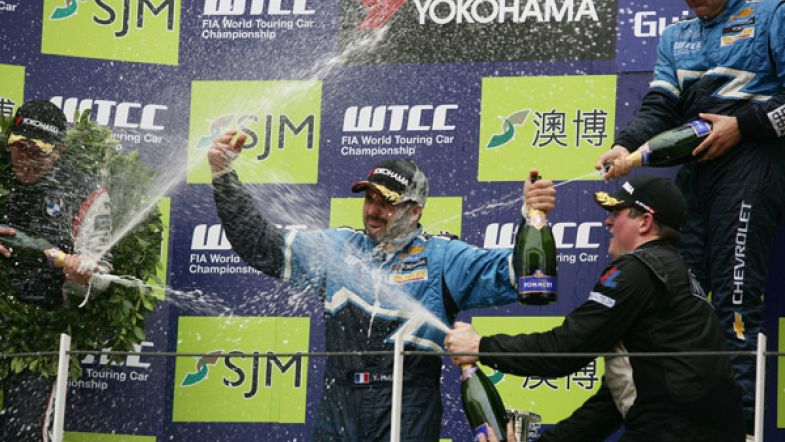 Muller delighted with third title & looks for fourth in 2012

Though Rob Huff took both race victories today, it wasn’t enough to close down Muller’s 20 point advantage in the Championship, with Muller taking the title with 433 points to Huff’s 430.

“I have to say thank you to all the Chevy team,” said Muller after the race. “Thanks to my team-mates because we all worked together to improve that car and that’s why we have the best car now.”

When Rob Huff took the lead from Tom Coronel on lap three, the British driver was on target to take the Championship lead, but only briefly as Muller was able to pass Mehdi Bennani’s BMW for fourth in the same lap, and just needed to hold station to secure the title.

“I knew everything had to be done in the second race, and I knew had to finish fourth place at least and when I was fourth I could breath again.”

“I have to say this weekend was very stressful, okay I managed it but it was tough,” said Muller to TouringCarTimes.

With Chevrolet confirming all three drivers will stay with the team for next season, the battle is set to resume in March with Muller, Menu and Huff the favourites to compete for next year’s title, but with

“Rob did a fantastic season, he gave me a hard time all year. He deserved as well to win, in the end it’s only three points difference.”

“(Next year) Alain will be there as well, but I’m sure there will be some other cars from other teams. Honestly I don’t know how or why we were so fast compared to the others (this weekend), okay good (for) us, but we’ll see next year.”