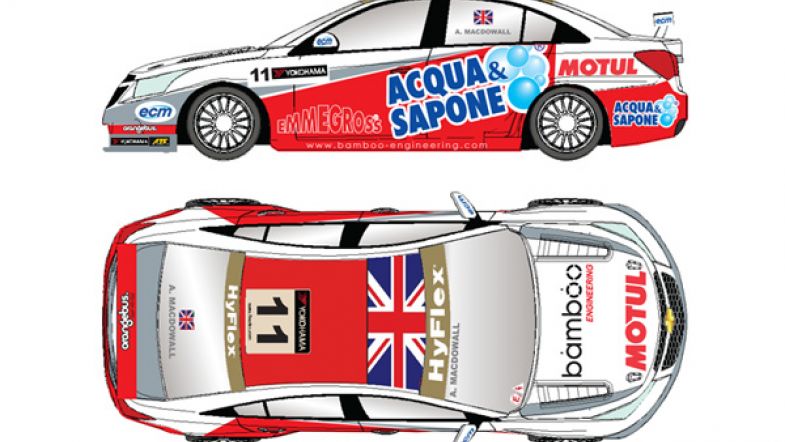 “I’m very happy to have signed with bamboo,” said Di Sabatino. “Moving up to the WTCC is a very important step in my career. I’m very pleased to be starting this new adventure with bamboo, they are a very good, professional team and have proved themselves in the WTCC previously. I have a lot to learn this year but I’m confident that with bamboo we can achieve some good results.”

The team has also announced that Alex MacDowall will be joining the team. MacDowall finished in second place in the 2009 Renault Clio Cup UK, before spending two years in the British Touring Car Championship racing for RML Chevrolet. The then 19-year-old took two pole positions as well as a podium at Brands Hatch in his debut season, and took a further two podium finishes last season in his second year.

Now 21, MacDowall will become the fifth British driver confirmed to be taking part in this year’s WTCC after Tom Boardman, Tom Chilton, James Nash and Rob Huff, the latter being Britain’s only full time representative in 2011.

“I am absolutely delighted at being selected by my new team bamboo engineering to represent them in their 2012 WTCC campaign, driving the 1.6 turbo Cruze,” said MacDowall.

“It is a fantastic racecar and its great to be continuing my relationship with Chevrolet and the Cruze and two really good campaigns in the BTCC, where I received tremendous support from the fans and sponsors. I’m really looking forward to the challenge of WTCC and I hope to be able to reward bamboo engineering for their faith in my ability with consistently good results.”

“We’re obviously delighted to have Alex and Pasquale with us for the 2012 season,” said Team Principal Richard Coleman.

“This will be bamboo’s third assault on the Yokohama Independents Trophy and our aim every year is to be competing for the trophy. We’ve managed to achieve this so far and I’m very confident that with this driver pairing we’ll continue to do so in 2012. Alex has proved himself in the BTCC over the last two seasons and I’m sure he’ll shine at world level as well. Pasquale of course has no previous Touring Car experience but he’s a very quick racing driver.”

2012 will be Bamboo Engineering’s third year in the WTCC, and the Silverstone-based squad will be again targeting success in the WTCC independents’ category, and will be one of two independent teams running the 2010-2011 Championship winning Chevrolet Cruze this season along with Nika Racing.