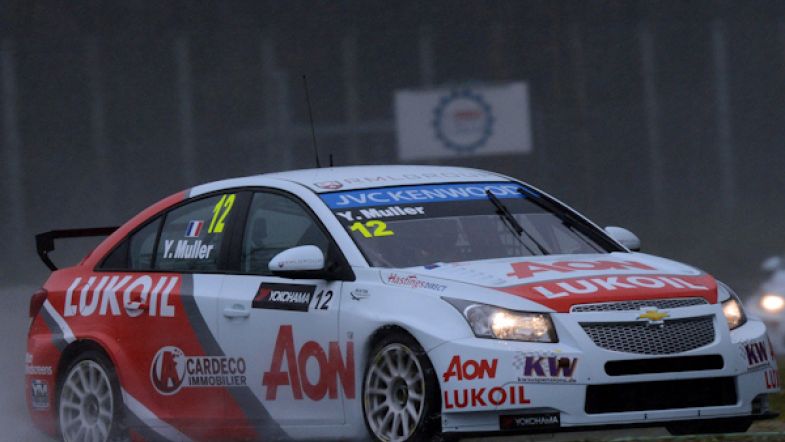 The race was the first event of the day to not start behind the safety car, despite the rain still falling. Darryl O’Young got away and held the lead through the first corner, but after a lightning start by Tarquini, the Italian was already up to second and then passed O’Young through the Curve Grande to lead the first race for Honda Racing Team JAS on their return to the Championship.

O’Young struggled to hold position in the rear-wheel drive BMW, with Marc Basseng in the Münnich Motorsport SEAT passing O’Young shortly afterwards, with O’Young down to seventh by the second lap and eventually finishing in 12th place.

On the same lap Muller was able to catch and pass Tarquini for the lead at the exit of Ascari and hold on to take his second win of the day.

A mistake for Marc Basseng, which saw him go down the escape road at Turn 1 saw him gift a spot to Michel Nykjaer. The Dane was able to close in on Tarquini and pass him around the outside of the Parabolica on lap eight.

Münnich Motorsport’s Marc Basseng put on a second charge and caught a struggling Tarquini, but was unable to pass the Italian and had to settle for fourth position, and as the top SEAT in the race.

Tom Chilton took fifth on his second race after starting eighth on the grid in the RML Chevrolet, with Pepe Oriola bouncing back after a puncture in race one to take sixth in race two.

James Nash ended up seventh and the only Bamboo driver to finish with MacDowall pulling into the pits with two laps to go, but is under investigation for exceeding the track limits.

Tiago Monteiro finished eighth in his Honda, with PB Racing’s Stefano D’Aste and Münnich Motorsport’s Rob Huff completing the top ten, both cars starting from the very back of the grid and after extensive repairs to D’Aste’s car between races.

Yvan Muller now leads the standings on 55 points after the first race with new team-mate Tom Chilton second on 32, heading to the next round at Marrakech in two weeks’ time.