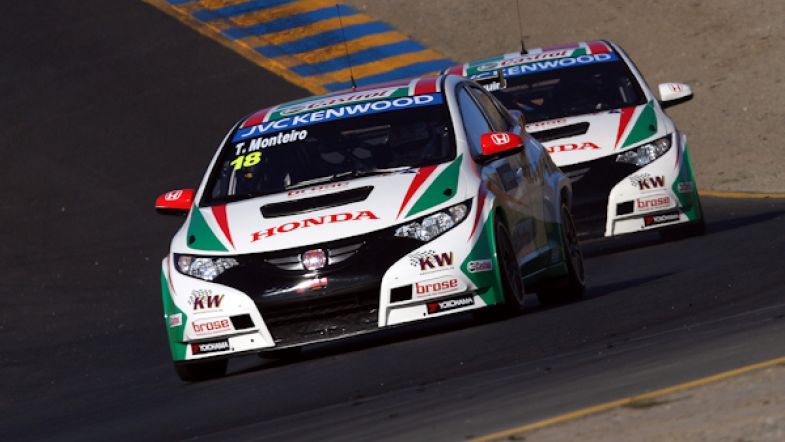 Honda to take the fight to Citroën with four cars

Newly crowned manufacturers’ champions Honda plan to take the fight to Citroën in the 2014 World Touring Car Championship with four new cars, with two Civics run by the works JAS outfit and another two by privateer teams.

The Japanese marque took their second win of the season at Sonoma Raceway this weekend with Gabriele Tarquini, whilst team-mate Tiago Monteiro fought RML’s Tom Chilton hard for the victory in race one, eventually finishing second and equalling his best finish of the season, with the privateer Zengõ Motorsport Honda of Norbert Michelisz also finishing on the podium in race two.

The results for Honda at Sonoma were enough to mathematically secure the never really in doubt manufacturers’ title against only rival Lada, but the team know it will be a tougher fight next year against new manufacturer Citroën, with drivers Sébastien Loeb and Yvan Muller and a car which has already begun testing.

“They are certainly ahead as of today as they have a car, and we don’t,” said William de Braekeleer, Honda Europe’s Motorsport Manager to TouringCarTimes.

“Timing wise we have a disadvantage now as we still have to finish the season and we could only start the development of the car when the new rules were implemented. It will certainly be a catch-up phase.

“Yes, we started later than Citroën to develop the (new) car, so Citroën may have a more developed car at the beginning of the season, but also as the regulations came late, we have the possibility to make changes to the car and homologations within the year, which then will help us during the season to test and implement new parts. Which means if we have a performance gap at the beginning of the season, we still have the opportunity to catch up quickly.”

The team is yet to announce their driver line-up for the 2014 season, but this is expected to be confirmed soon, and with at least one car still run by the Hungarian Zengõ Motorsport team.

“The plan is to stay with two works cars, and to extend to two private cars,” confirmed de Braekeleer.

“At the moment, we are not speaking about the drivers for next year. We will have two cars, and the drivers’ will be announced in due time.”

Honda has also now become the fourth different make in the modern era of the WTCC to win the manufacturers’ title, with BMW winning for the first three seasons, SEAT from 2008-2009, and Chevrolet since 2010.

“It’s nice to celebrate the title with a win,” added de Braekeleer. “What is really important for us is this win, and the way all three cars behaved. All three drivers did a fantastic job this weekend, it was a very good weekend for Honda.