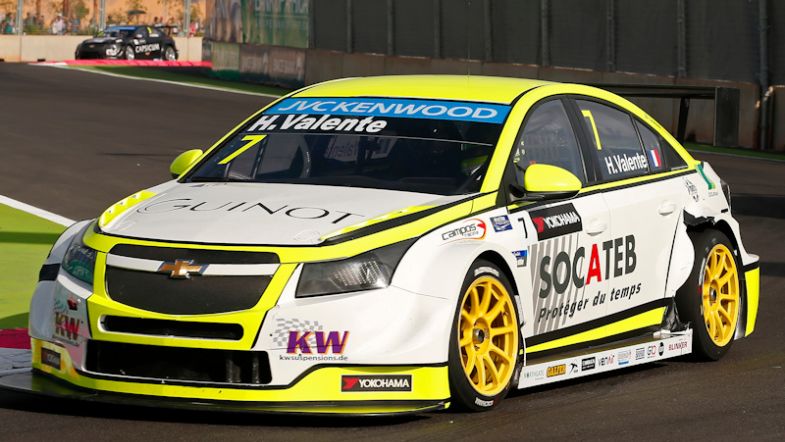 Campos Racing Hugo Valente scored his best career result in round one of the 2014 WTCC at Morocco with third in race three, the only non-Citroën driver to finish on the podium at the weekend, but like many others, was struggling with braking problems all weekend.

The 21-year-old Frenchman had qualified in 12th position, despite strong showings in practice, also due to a braking problem, but made a good start in race one and finished in eighth behind the Hondas of Tiago Monteiro and Mehdi Bennani, and had an even better start despite the first lap collision between Bennani and Tom Coronel in race two, which allowed him to work his way forward and grab his first podium position.

“In race one it was difficult, as we had big problems with the brakes, I couldn’t brake as late as I wanted,” said Valente. “It was horrible as I could not do anything to overtake the Hondas, so it’s something we have to work on, but still scored some good points with eighth.”

“I was also really unlucky yesterday in qualifying, as in practice I was always in the top five and I was hoping to get to Q3, but I had no brakes in Q2 and couldn’t do one lap, so that meant we started P12, which was difficult for race one, but in race two I think I was very lucky as I think if I’d qualified better I would have been in the crash.

“The objective was to bring the car home, so finishing P3, for three quarters of the race I was being careful on the brakes and not pushing too hard, so I was very lucky the guys behind were so far back, as I was just cruising until the end.”

Valente wasn’t the only driver suffering with braking issues during the Marrakech weekend. Tom Coronel’s crash in FP1 was put down to a brake issue as well, and brake problems also hampered the other Chevrolet drivers, with Gianni Morbidelli forced to run off the pace in race two, and with Valente’s team-mate Dusan Borkovic retiring with a brake related issue.

The Citroën drivers also complained about overheating brakes during the weekend, with all of their drivers coasting after just a few laps.

Valente believes the problem was exaggerated due to the nature of the Moulay El Hassan street circuit, but believes a problem still needs to be found soon.

“It’s a very difcicult track for the brakes here, because even though there’s a lot of straight lines, there’s a lot of hard braking zones and it’s also very hot. I don’t think there will be any other races this year that will be 35 degrees, except maybe Budapest during the summer, so that didn’t help our brake issue, but we need to find a solution as if it stays like this we can only push for three laps during the race.”

Valente also believes that the RML-built Chevrolet’s advantage over the Honda and Lada teams won’t be so noticeable at the upcoming tracks on the calendar.

“This track is so special, it’s just a few straights, a few chicanes and a hairpin, so I think the Honda will be faster on tracks like Le Castellet and Budapest, for sure they will struggle where straight line speed is an issue, but they will be faster, so it won’t be like here where it was really Citroën, then Chevrolet, then Honda or Lada, there will be more of a fight.

“But I’m really happy with what RML have done, it’s easy to drive, it’s fast so I can’t complain. It’s very different from the SEAT. The SEAT was really hard to drive, a lot of understeer, quite slow. So I’m very happy to be with the Chevrolet this year, I think we made a good choice.”