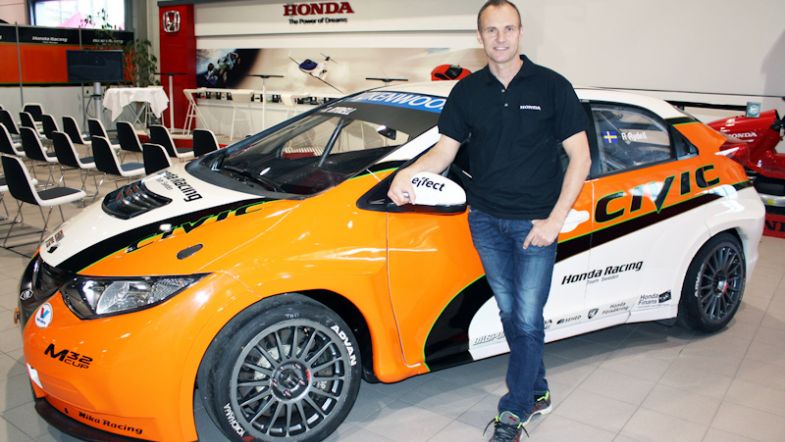 Rickard Rydell to enter the 2015 WTCC with NIKA-run Honda

Swedish driver Rickard Rydell will return to the World Touring Car Championship for the first time as a full-time driver since 2009 next season, racing in a new TC1-class Honda Civic run by Nika Racing, the team that took him to the 2011 STCC drivers’ title.

The team competed in the WTCC for their first full season last year with a Chevrolet Cruze for Michel Nykjaer, and were in the hunt for both the drivers’ and independents’ titles until the final few races.

They will compete in selected rounds this year with a Honda in the TC2T class for Yukinori Taniguchi, but will step back up to a full season effort in the TC1 class next year with the new Honda Civic WTCC.

“I’m thrilled to be representing an all-Swedish team in the WTCC starting next year,” said Rydell, who last raced at Shanghai last year. “The Honda Racing team Sweden project is one of great promise, and I’ll approach it with full dedication. The WTCC is highly competitive and lots of fun, and the new TC1 rules will provide us with an interesting technical challenge. I’m really looking forward to getting testing underway later this year.”

Honda Europe Motorsport Manager William De Braekeleer added:
“Ever since we joined the WTCC, it has always been in Honda’s policy to make our cars available to private teams; we think it is giving the championship extra interest. Besides a Hungarian and an Italian/Moroccan private outfit, it’s needless to say that we are delighted to welcome such a professional team as NIKA Racing to the Honda racing family.”

Team Principal Nicklas Karlsson said:
“This is an exciting step into the future for NIKA Racing. The prospect of fielding Rickard Rydell in a full-time, all-Swedish WTCC assault is obviously highly inspiring for everyone involved, and the TC1 rules have opened up the door to some even more intense racing. In Honda Sweden, we have a very strong partner, and we do have high ambitions.”